You are here: Home / Dogs / I Figured It Out 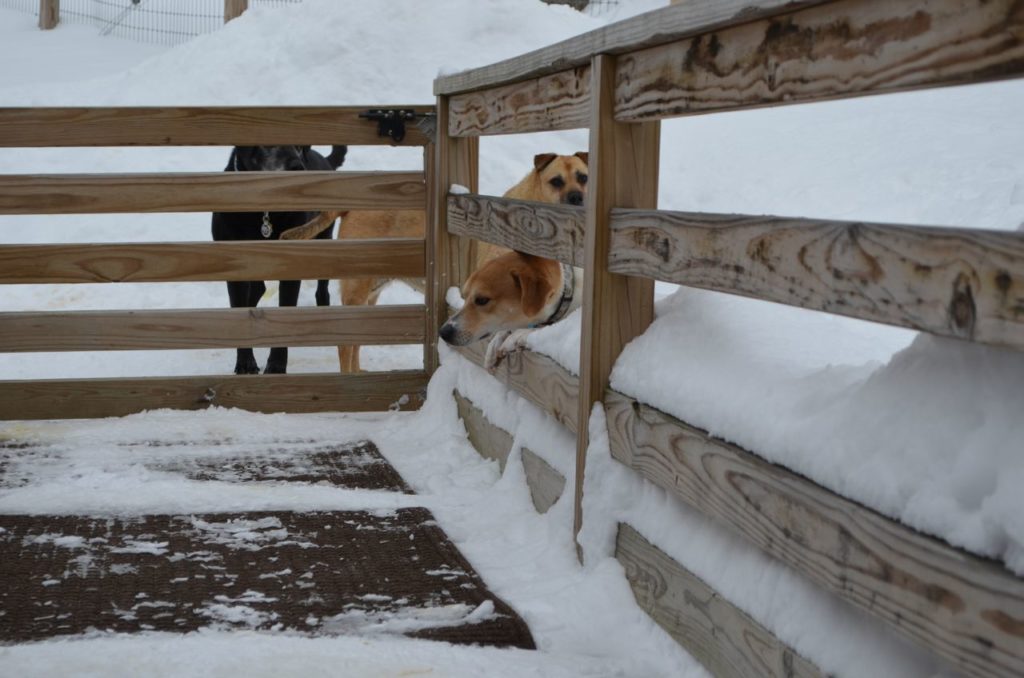 Alayne saw three-legged Tanner figure out how to get through the railings on the ramp last week for the first time, after he watched (and presumably studied)?Aurora doing it with ease over and over again for the past year. So I was waiting with the camera on Sunday morning to catch him in action. That’s Tanner checking things out above, with Stella and Holly behind him. The key for Tanner, it turned out, was two-fold: First, the snow needed to be deep enough to give his one back leg a boost, as it were. He had tried before, when we had little snow, and it was too high a climb for him, given the maneuver he’d have to pull off to get through.

He begins by?putting?his front right leg through, and you’ll see?he’s starting to twist his body — that’s the maneuver part he realized was crucial to fitting through the railings: 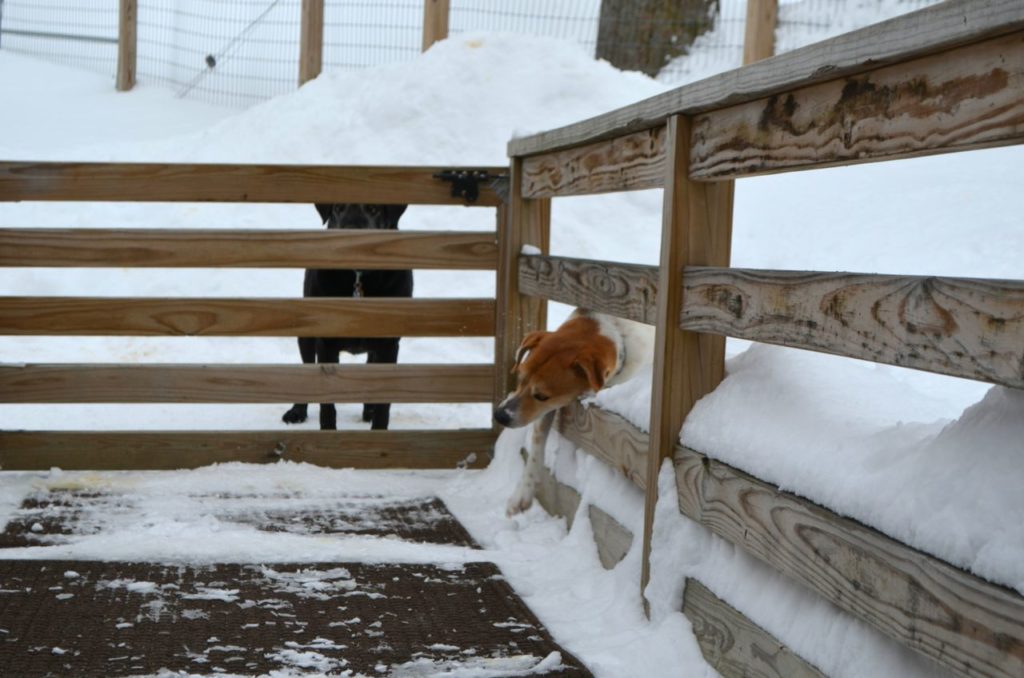 Then notice his other front leg?coming through, tucked behind the first one, as he turns his body … the snow is acting as a shelf, so he’s kind of laying on the snow for support: 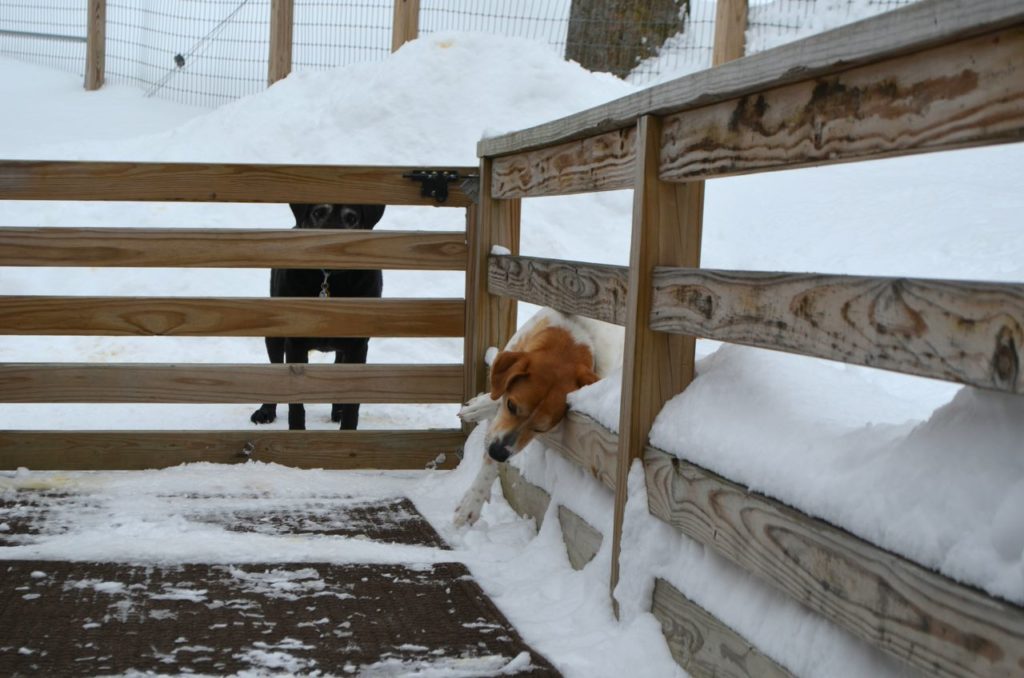 In a flash, he’s through: 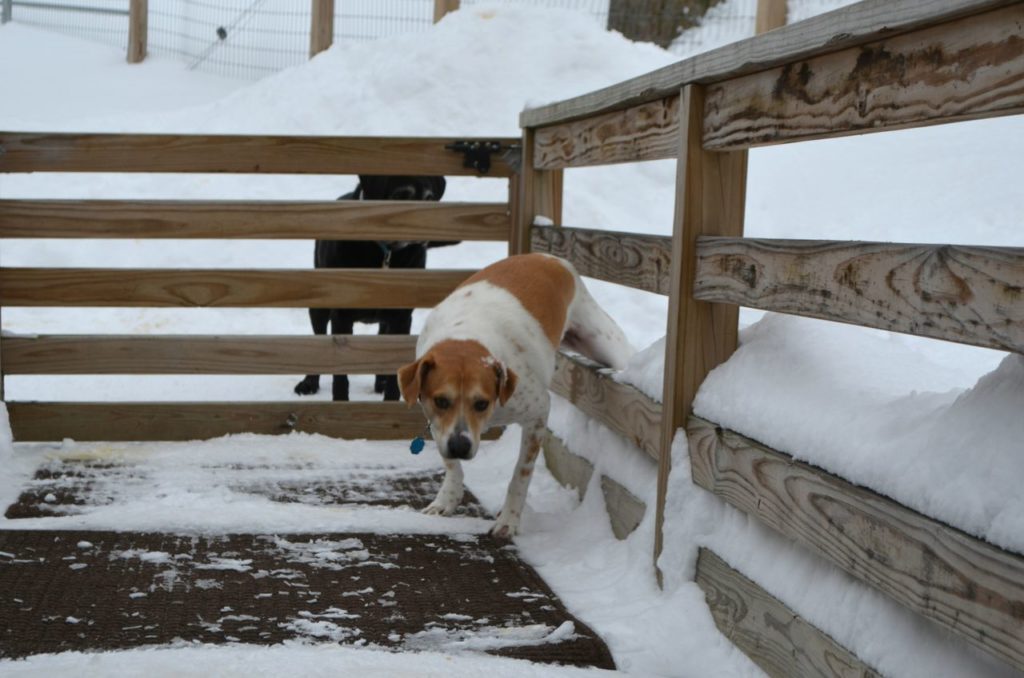 And racing right at me: 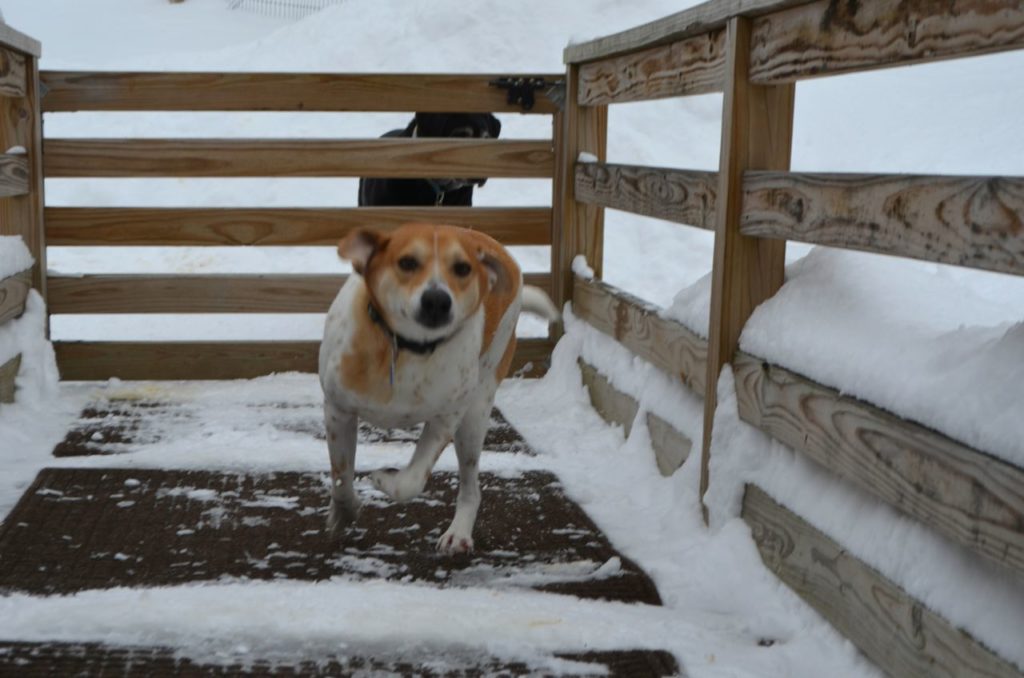 The camera tells me there was all of 38 seconds before the very first shot of him looking through the railings and the final one of him running towards me.

Meanwhile, Stella is wondering how Tanner just did that — “Hey, where’d he go?”: 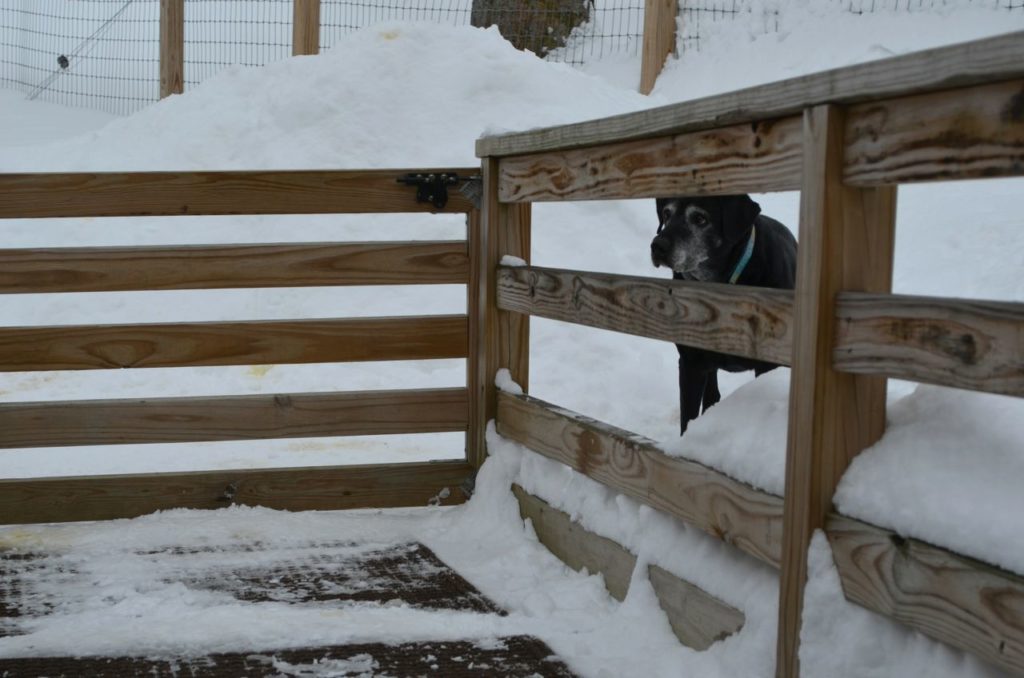 ?A minute later, Tanner hurtled into the living room, picked up his favorite (for the moment) toy, and proudly showed it off: 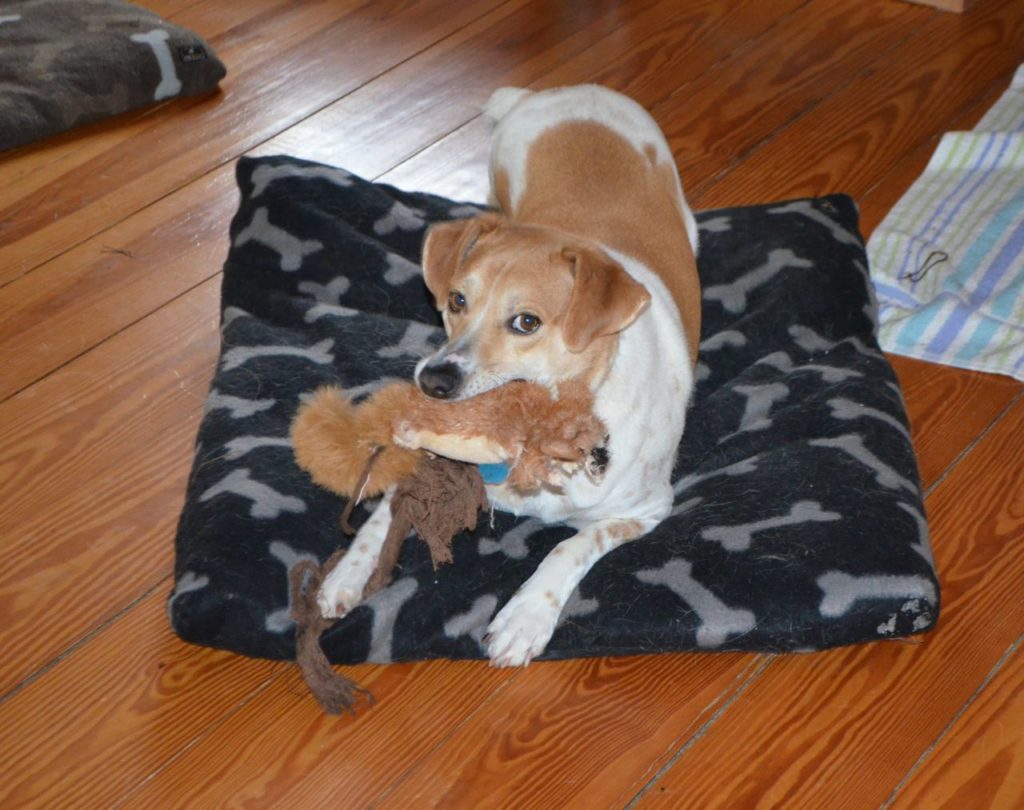 As I was taking photos of Tanner in the living room, I heard a commotion coming from down the hall in the dog room. There was Stella, happily giving a dog bed her usual “morning thrashing”: 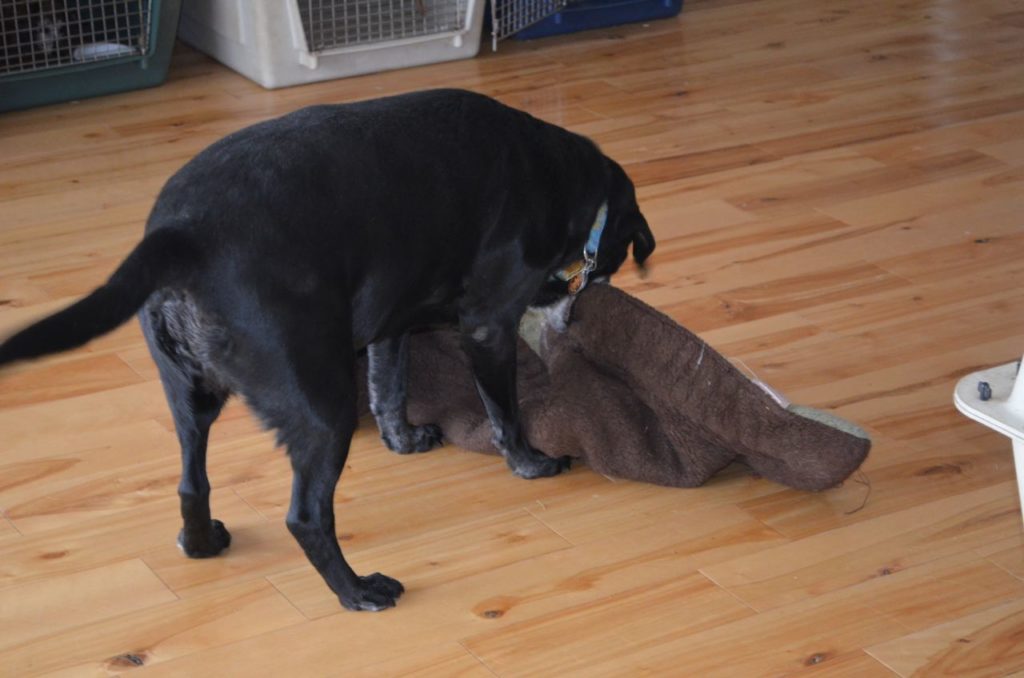 That’s a standard feature of her morning routine after coming back inside. If I’m not there to roughhouse with (her first choice), she grabs a dog bed, a toy, or blanket, and works it over?for several?minutes. (She’s kinder and gentler with me, though not by much!)