You are here: Home / Dogs / Hey Everybody, I Can See Again! 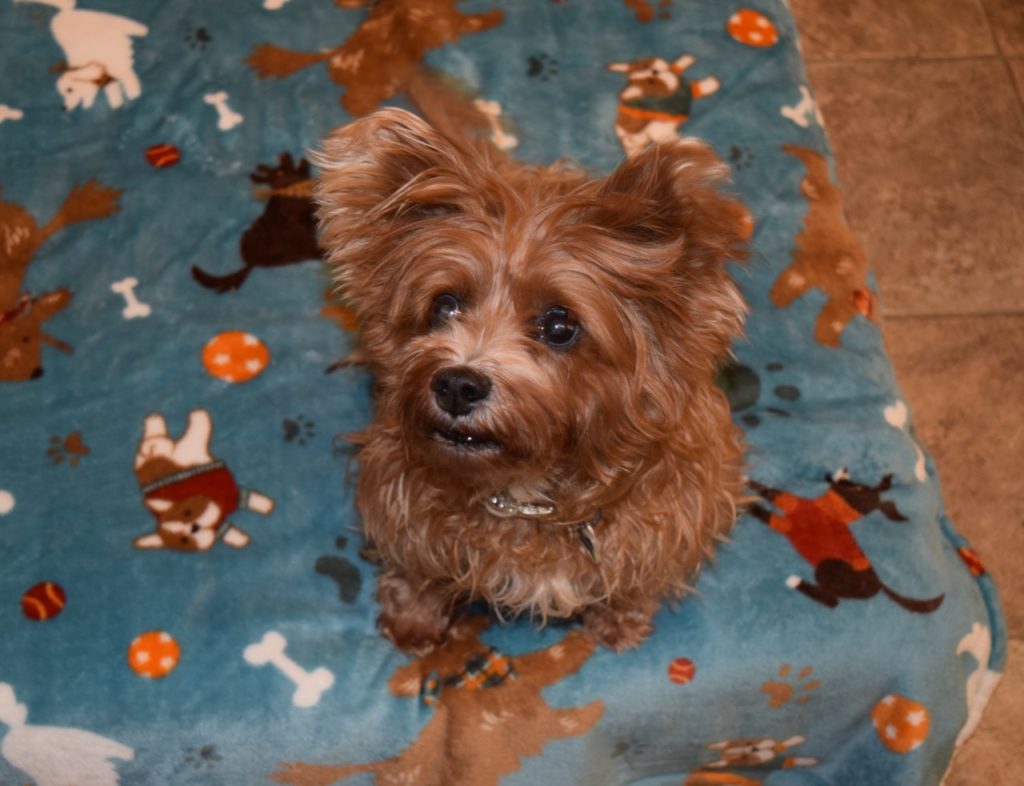 Dolly had come to us back in the spring, diabetic and blind from cataracts … an all too common consequence of canine diabetes. It took us a while working with our veterinary internal medicine specialist at Peak to get Dolly’s diabetes under control, as I explained in this blog post. We ended up using a novel basal/bolus insulin therapy for Dolly, which made an amazing difference for her. At that point we were able to proceed to cataract surgery.

But the day before her cataract surgery, Dolly developed an ear infection, so we had to postpone the procedure. Then, just before she was due at Peak again, another health issue cropped up, so we had to postpone yet again. Finally, the appointed day came — third time’s the charm! — and I dropped her off at Peak for the surgery. Back home, hours later, we anxiously awaited the call from the veterinary ophthalmologist saying everything had gone well. The clock kept ticking. We started worrying.

Finally, we got the call. The delay, it turned out, was because the surgical instrument the ophthalmologist uses to pulverize the proteins that make up the cataract, and then vacuums up the shattered proteins, failed just as the doctor was about to finish Dolly’s first eye. The device lost most of its suction power. That had never happened before. The ophthalmologist spent more than an hour troubleshooting, then speaking with engineers at the medical device company that manufactures the instrument, and yet nothing restored the suction power. Fortunately, she had just enough left that she could very slowly, carefully, finish that one eye.

Yet that one eye was beautifully visual, and the next day I brought Dolly home. We then spent the next several weeks administering the multiple rounds of eye drops every day that’s part of the post-op routine, and waited for the rescheduled surgery for her right eye.

That surgery went off without a hitch several weeks ago, and this young lady can now see from both eyes — and what a delight it is to see the difference in her, and for her!

Dolly was always full of personality, but once she regained her sight she also became much more affectionate with us. I’m not sure why that is — we haven’t seen that particular change before in all the cataract surgeries we’ve done over 20 years — but she is now more outgoing and demonstrative in her affections.

She was pretty high energy even blind, but now that she can see, she zooms everywhere, darting back and forth. She races into the house, does a few mad circles in the living room, jumps onto a bed, then off again, and bolts for the kitchen.

The one thing we noticed is that the cataract surgeries had a negative impact on her diabetes. Nothing bad happened, but her glucose became persistently elevated again and adjusting her insulin dose didn’t seem to make a difference. This did not surprise our ophthalmologist, who said it could be the result of the anesthesia as well as one of the eyedrops, a steroid called prednisolone. She had seen this crop up in other diabetic dogs after cataract surgery.

So once we get past all the eye meds, we’re confident we’ll make up the lost ground on her diabetes management and get back to where we were.

(Just an aside:  If you look at those earlier blog posts, especially her arrival one, you’ll notice her hair coat was very thin. Contrast that to the photo above, where she now sports a luxurious amount of hair! That’s because of better diabetes management in the past several months, plus a better diet.)

For now we are happily adjusting to Miss Zoom Zoom enjoying her new vision!