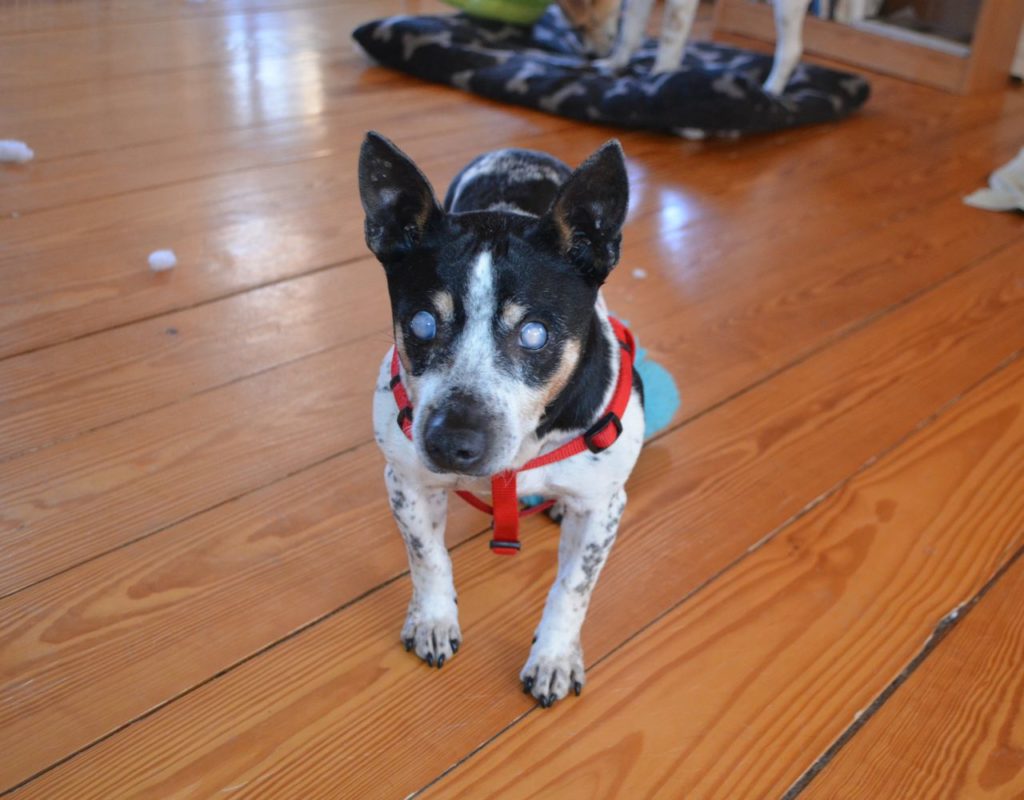 This little guy arrived Friday night from Tennessee. His story is one of both human indifference to the suffering of animals, and of human kindness and compassion. Two weeks ago, as that “polar vortex” swept south, bringing record subzero temperatures to states like Kentucky and Tennessee, two women noticed a neighbor’s dog still chained up outside. Here’s how?one of them described the situation to me in an email:

“On Wednesday a friend and I rescued a Jack Russell mix from what I believe would have been his last night alive … temps that afternoon were in the teens with a windchill in the single digits. That evening was to bring temps in the negative. My neighbor had their 14-year old JRT outside, tethered to a fence post, long enough to get inside the igloo and that was it. There was no visible food or water, as the bowl (an old margarine tub) was on its side and empty. There was no bedding or hay inside the igloo to offer any sort of insulation from the cold.

We knocked on the door and got no answer. At that point I decided it was probably best to spring into action and get the police involved, as other neighbors informed us that the dog had been out since the night before. The owner ended up showing up while I was on the phone, so I politely declined police help and asked the owner if he?would be taking the dog in, as it was bitterly cold and there was no way this dog was going to survive these temperatures. He said no, so I asked if I could take him in so he had a chance. They allowed me to take the dog. Upon getting the dog situated, we noticed he was infested with ticks and his collar was partially embedded in his neck. The dog was taken to a local vet where he was treated for ticks. The baby is doing well now, however we are in dire need of a foster. Taco, that’s his name, is completely blind and has never known the inside of a home.”

The dog’s owner subsequently relinquished ownership to them, and the two ladies had then?contacted local rescue groups, none of which was able to help. That’s when they contacted us. As luck would have it, our pet transport company, TLC Pet Transport, had a driver?heading that way. Just five days after getting the original email asking if we could take Taco, he was here at the farm in New Hampshire.

You know, we get a lot of credit from people for doing what we do, but it’s people like these two ladies who deserve the real credit. The disabled dogs who come to us do so only because someone intervened in their lives to save them in the first place. Here are these women, willing to confront a neighbor over his treatment of a dog left outside in brutal weather. That takes courage and real fortitude. Compared to that, we’ve got it easy.

As for that collar embedded in his neck, this is what the scar still looks like two weeks later: 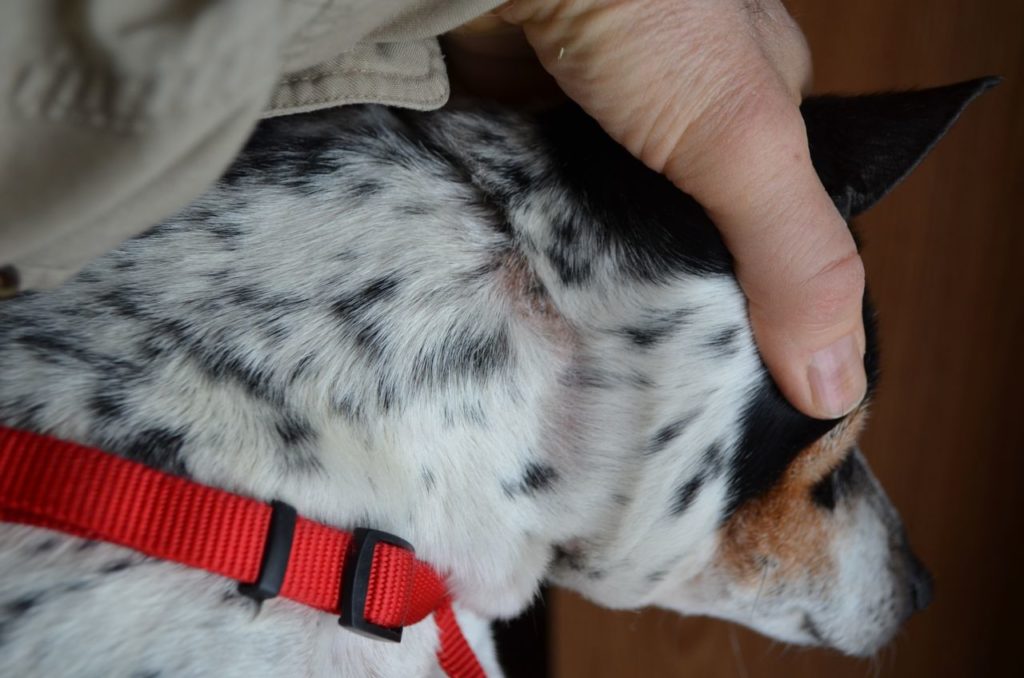 It goes all the way around his neck.

The ladies took good care of him, not only taking him to the vet the first time but also a second time to get his vaccinations and interstate health certificate for his trip. Taco also went to a groomer for a much needed bath and nail clipping (as you can imagine, terribly overgrown). He weighs 16 pounds. He had neither the body mass, the hair coat, or the appropriate shelter to survive outdoors overnight in subzero temperatures.

Taco is a sweet, friendly fellow, who gets along great with the other dogs. Although he’s never lived indoors before, he is doing very well with house training — only one accident indoors thus far.

We think he’s a Jack Russell Terrier/Blue Heeler mix. Very alert and very smart (as I’ll show in a subsequent post!). I have already scheduled a full round of veterinary appointments for him at Peak Veterinary Referral Center in Burlington later this week, including with our veterinary ophthalmologist. His eyes seem comfortable — there’s no tearing, discharge or squinting. His left eye clearly had a large corneal ulcer on it at one point that was never treated. My hunch is there are multiple things going on with his eyes. 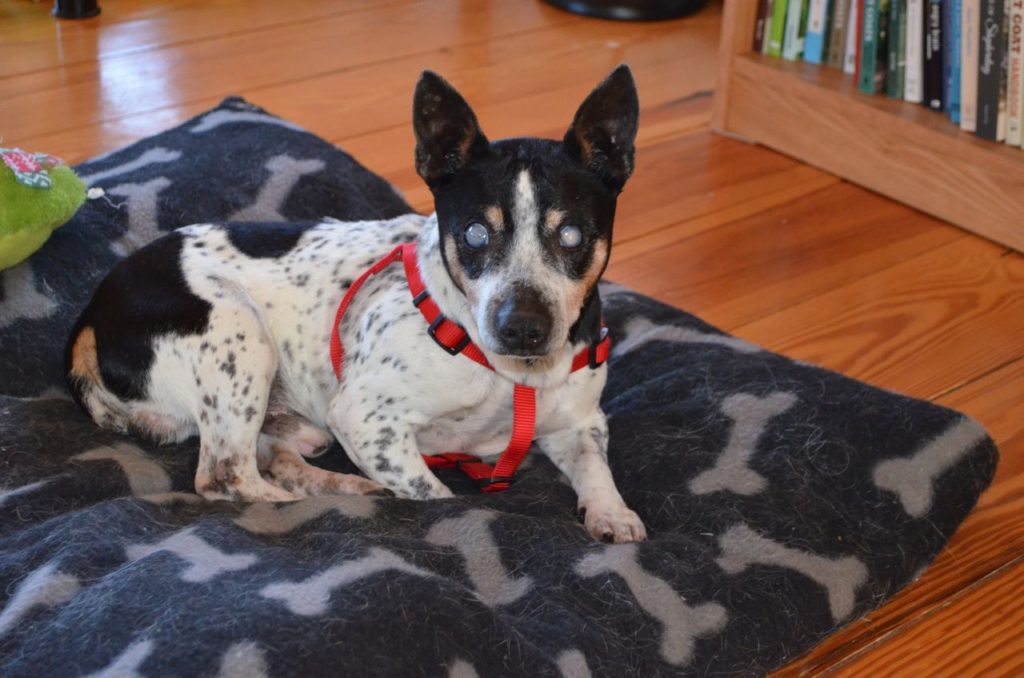 Meanwhile, Tanner — the self-appointed “camp social director” — was happy to have a new friend: 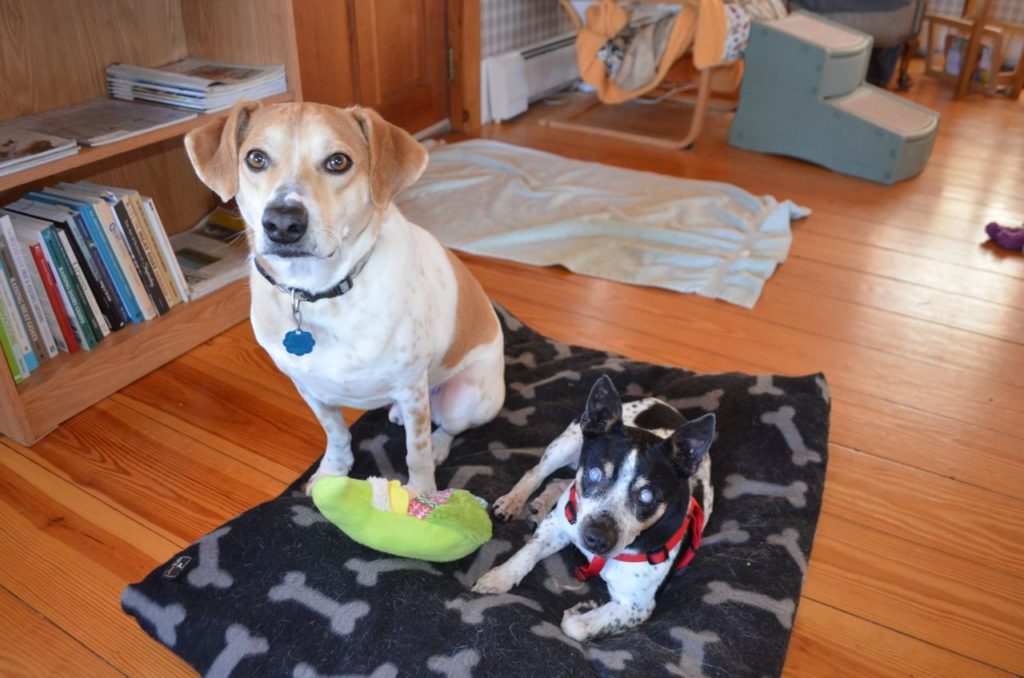 That photo gives you some idea of just how small Taco is. Definitely an easy “picker upper” type!

(The white fluff on the floor in the photo at the very top is part of the green toy you see at Tanner’s feet. Wherever Tanner is … you’ll find shredded toy material scattered about.)

I’ll have more next week on Taco, but for now, please join us in welcoming this little tyke to the farm!