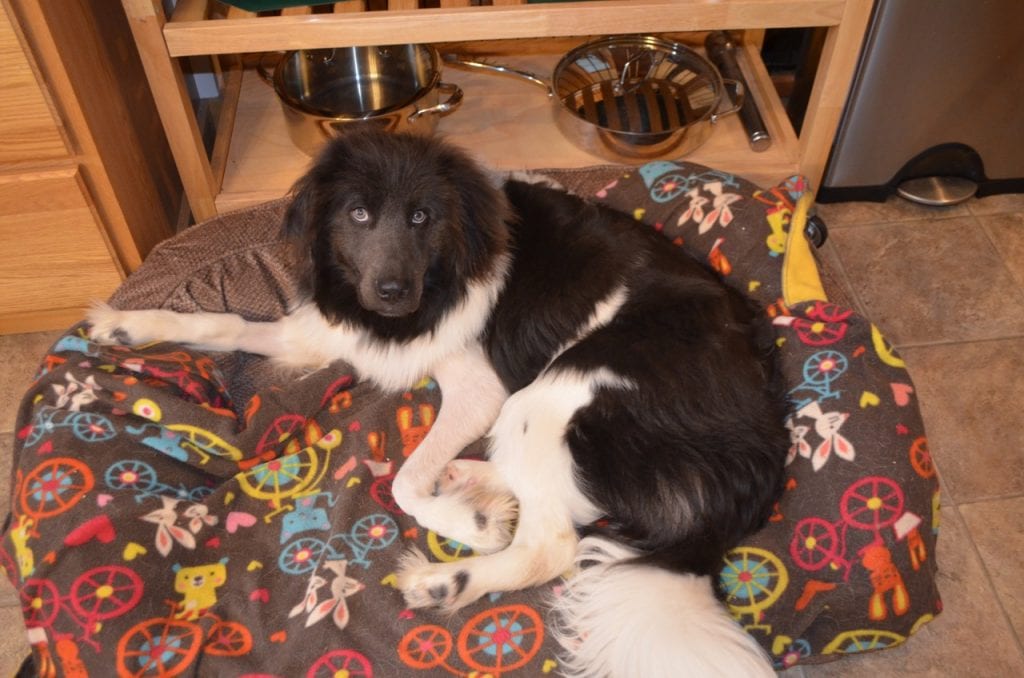 This is our newest arrival, Mia, a 10-month old Newfoundland puppy with multiple serious orthopedic problems.  A family in Long Island, New York purchased her at the age of three months for $1,995 from a local puppy store as a “purebred registered” Newfoundland.  By the time she was only six months of age, Mia was already showing signs of severe dysplasia in both hips — difficulty walking, getting up, etc.

The family took her to a vet clinic, whose radiographs confirmed how damaged and unstable her hips were.  But the X-rays also showed she had a fractured front left elbow, too … not the result of poor breeding but trauma.  How that happened we do not know.  It had never been treated.  Dismayed with the diagnosis, and unable or unwilling to invest any more money in this puppy, they took her back to the puppy store.  At that point the time limit on their “money-back guarantee” had expired, but they left her at the puppy store and walked out.

The puppy store clerks, now looking at a much larger, no longer sellable dog, called the vet clinic Mia had been taken to by her owners and asked the clinic if they could come and get her.  They did.

Mia spent the next couple of months being fostered by various vet clinic employees as they tried to find someone to adopt her.  But her medical challenges were daunting and would be very expensive to address, and no one would agree to take her.

Finally, a vet clinic employee named Kayla O. who had just taken over fostering Mia emailed us.  She explained the situation and included video clips of Mia walking as well as the X-rays they had taken of her hips and front left leg.

The video was painful to watch … we could see this still young puppy shuffling along, front left leg sticking out a bit and stiff, while her back end wobbled.  The X-rays revealed hips that looked like they should belong to a 15-year old rickety dog, not an energetic puppy.

I forwarded all this on to our veterinary surgeon at Peak in Burlington, Dr. Kurt Schulz, and asked him what we could do for her.  He told me that while he would still need to evaluate her in person, of course, it was pretty clear we would be taking on “a project,” as he called it.  Meaning lots of surgeries, lots of post-op care, all complicated by her young age, the fact that she was still growing, and her overall size.

We realized Mia was one of those medical cases that hardly anyone else would willingly take on, so we agreed to make her “our” project.  About a week later, in early October, Kayla drove Mia up to us from Long Island.

We had originally been told Mia was a Newfoundland/Border Collie mix, so we hadn’t been that concerned about how big she would eventually get.  But during her first night here we began going through the paperwork that came with her and found the “breed registration” paper from the puppy store.  Mia was, in fact, a purebred Newfie, with five generations of parentage listed on the document.  But on one side of her lineage, we could see where the breeder had inbred her grandparents.  Was this why she was already such an orthopedic wreck?

In any case, we found ourselves with a 66-pound, 9-month old Newfoundland puppy who struggled to walk and was on pain medications.  She was sweet as could be and only wanted to please.  Mia has plenty of puppy energy that is a complete misfit for the body she has.

On her first morning here she fell down in the living room, cried out, and stood up holding one of her rear legs in the air.  We rushed her to our local vet clinic, fearing the worst, but it turned out to be only a sprain that fortunately healed.

All she wanted to do was play and roughhouse with the other dogs, but of course this was the last thing her frail joints needed.  We decided to confine her in the kitchen, which has a wrap-around puppy pen with gate to keep the dogs out.  (Hard to cook with a dozen or so dogs underfoot!)   Our goal was to keep her quiet and “on rest” until otherwise directed by our surgeon.

At Peak, Dr. Schulz examined Mia, took a new and better set of images of her hips, and laid out our options:

— Total hip replacements or FHOs (femoral head ostectomy) for her rear legs.  Because of her size, an FHO is less than ideal and would not return her hips to completely normal function.  It is, however, less expensive and relatively free of complications.   (Note:  We’ve done many FHOs over the years and always had good success with this procedure.)

For Mia, a total hip replacement would be the best thing to do … the only problem is correctly guessing what her final size and weight will be, because the implants are rated for certain weights.  Put in an implant too small for her eventual size, and she could develop problems later.  But … we don’t have the luxury of just waiting for her to stop growing, because with the passage of time the “laxity” or looseness in her hip joint increases, which makes the hip replacement surgery more difficult.  Her hips are already shot, so time is of the essence.

So we decided to go with the total hip replacement, beginning with her left rear leg, which is her weakest and most vulnerable.

— A corrective osteotomy for her left front elbow that had been fractured and never treated.  This involved cleaning up the joint, removing damaged cartilage and bone fragments, and bolting on a metal plate to strengthen the joint.  For a number of reasons, Dr. Schulz did this operation first.  Mia came through the surgery just fine, and we are already past the post-op stage now.  This elbow repair will help her cope with the subsequent hip replacement surgeries.

But during her recovery from that first surgery we noticed Mia’s right front leg — her only “good” leg! — was beginning to appear weak, and she was sometimes falling over when she tried to rely on it too much.  Other times, Mia would yike when she turned too quickly on it.  I called Dr. Schulz and told him that I thought we might have a problem with that leg after all.

On the next follow-up, he did another physical exam on that leg and sure enough, she exhibited pain when he palpated the joint.  X-rays showed incipient signs of elbow dysplasia.  She now actually had no good legs.

Also during her recovery period, Mia started peeing blood in her urine.  Alarmed, we took her back to Peak for tests and an abdominal ultrasound … where we saw she had an intact uterus.  That was surprising because we’d been told Mia was spayed.  With urine tests negative for infection, it became clear that Mia had been in heat, and for some reason she only bled when she peed.  (Over the years we’ve had plenty of female dogs come to us unspayed and they just dripped blood when in heat — we never saw blood only in their urine.)

To address her right front leg before it gets worse, Dr. Schulz is going to do surgery arthroscopically (minimally invasive) to clean up and repair that elbow joint, and he will spay her at the same time.

In other words — one surgery down, three more to go.

Meanwhile, Mia is one happy girl who spends much of her day upside down, sideways, or in various other convoluted angles. Here’s a photo I took yesterday: 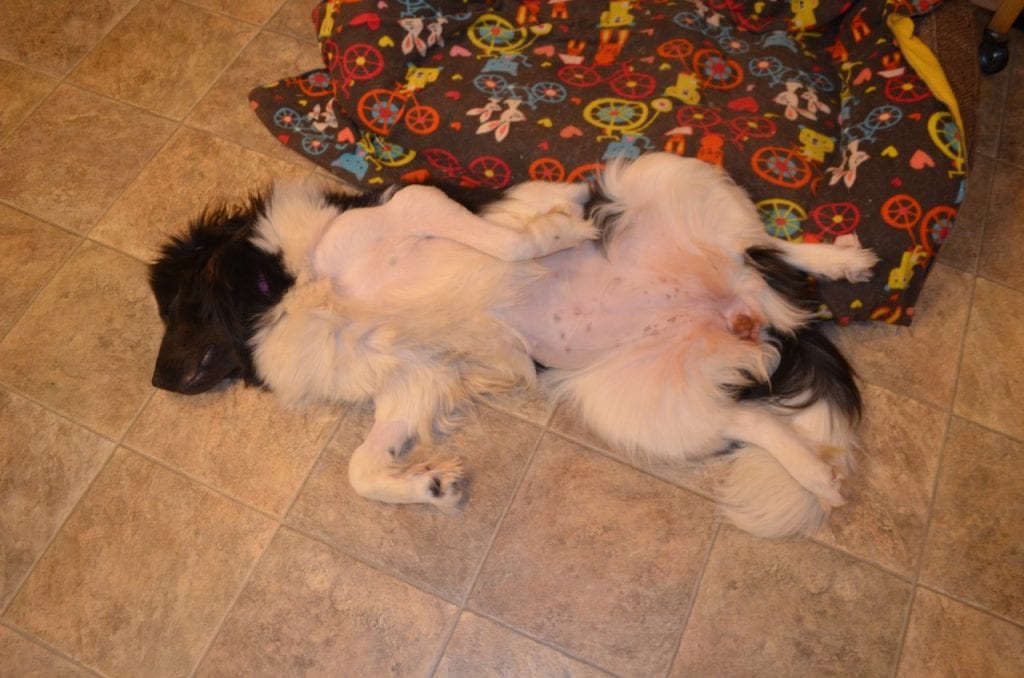 Naturally, all of the other dogs want to know why Mia gets to live in the kitchen, which is where they have always wanted to be!

Thanks to a determined vet clinic staff in Long Island, Mia is going to get a second chance.  She’s got a tough road ahead, but she will get the best medical care possible.  If all goes well, she will have four “new and improved” legs to show for it!