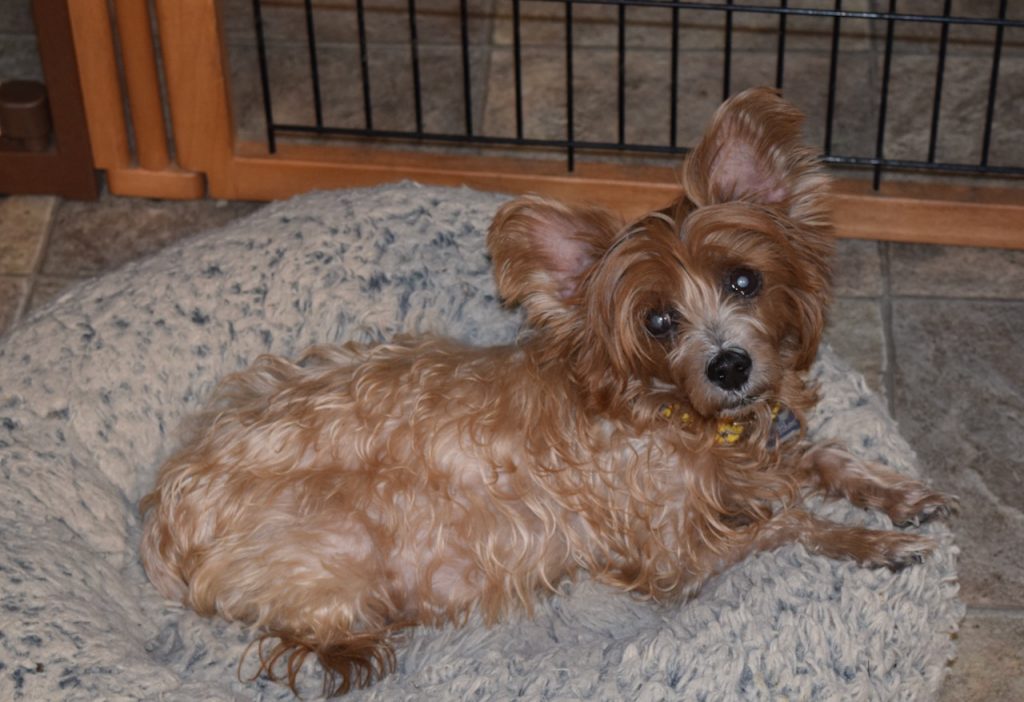 This adorable girl arrived last weekend from Washington state. She’s diabetic and blind — you can see those impressive cataracts in the photo above. One of our wonderful, longstanding supporters in Washington, Judith A., had contacted us about Dolly. A local rescue group was trying to find another adoptive home for Dolly, after she had bounced through a succession of adopters and fosters.

In fact, we are home No. 5 for Dolly since October. She’s been through a lot of upheaval. The general issues seemed to involve people not being able to adequately manage and/or afford her diabetes treatment.

Judith had recently adopted an elderly dog from this same rescue group, and they had just let her know Dolly had been adopted out yet again but it wasn’t working. Judith got in touch with us, and we offered to take Dolly.

Judith then swung into action. The next day she picked up Dolly from the latest adoptive home, took her to a vet clinic for a spot glucose check and health exam, picked up a new bottle of insulin and needles, and did countless other things in the following days to ensure Dolly’s comfort and well-being. Judith and her partner Rusty fostered Dolly at their home until our pet transportation company, Royal Paws, could get there the following week. Honestly, we could not have done this without Judith and Rusty’s efforts on Dolly’s behalf.

The Royal Paws drivers, Keith and Nan, took great care of Dolly on the trip to New Hampshire. Nan is a former nurse and thus understood in great detail about diabetes and how to manage it, so we were relieved to have her looking after Dolly.

Dolly is about 8 years old. She originally ended up at the rescue group because her elderly owner was no longer able to care for her.

I’m taking Dolly to our veterinary internal medicine specialist in Burlington tomorrow for a full work-up, including abdominal ultrasound and blood work. In the afternoon she will see our veterinary ophthalmologist for an eye exam and ERG (electroretinogram) to determine how well her retinas are working. If they are in good shape, she may be a candidate for cataract surgery. We would love to restore her vision if we can!

I think her retinas are working just fine, by the way. I had a very strong pupillary light reflex when I shined a flashlight in her face on one of her first nights here. Not only did her pupils immediately contract, but she turned her head away because the light was uncomfortably bright. And in many of the photos I’ve taken of her, she blinks when the camera flash goes off. But the ERG will tell us for sure about the status of her retinas. There could still be other eye issues that could preclude cataract surgery, but one way or the other, we will know by the end of tomorrow.

A couple of days after Dolly arrived, we put a Continuous Glucose Monitor called a FreeStyle Libre on Dolly to record her glucose readings around the clock. This means I can give our internal medicine specialist several days of 24-hour glucose readings to help her decide whether Dolly is on the right type and correct dose of insulin.

You can see the CGM sensor on her side in this photo: 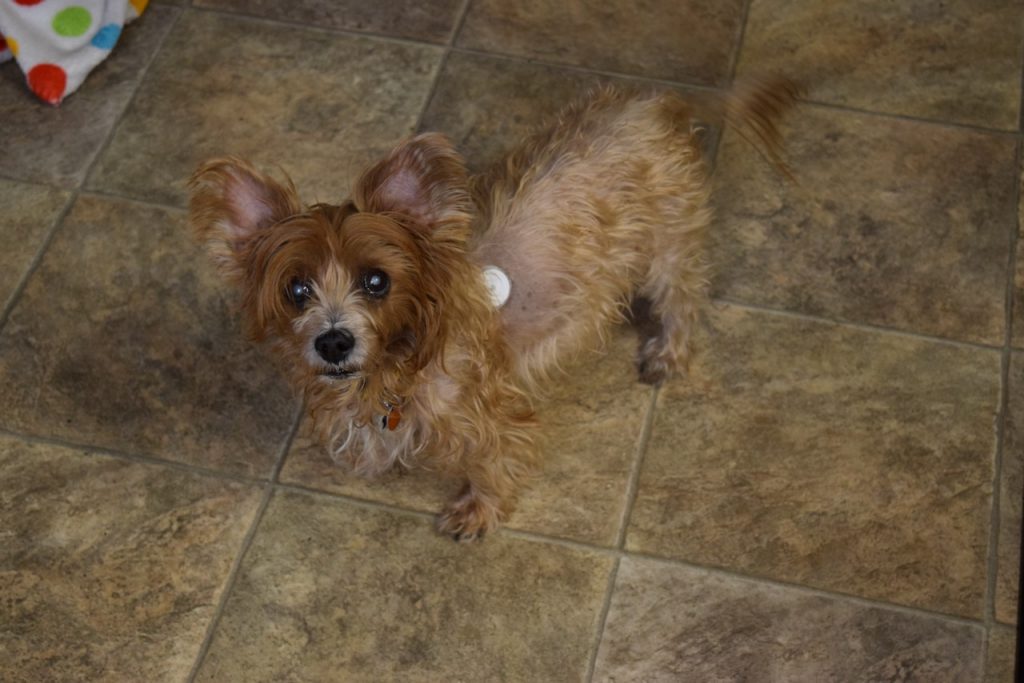 Here’s what Dolly’s glucose chart from Saturday looked like: 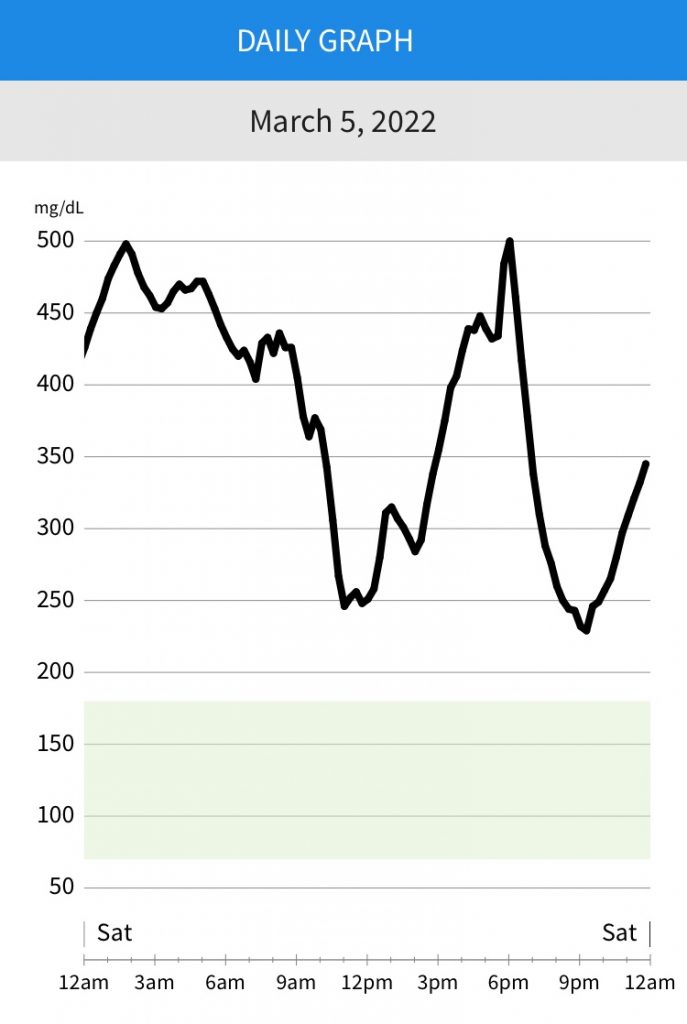 The green shaded area is the “target” zone. If she dropped out of it at the bottom end, she would start running the risk of hypoglycemia, where her blood sugar drops too low. This could be fatal if not caught in time. A normal dog would typically be in that green area most if not all of the time. You can see just how wild her swings can be.

Here’s her chart from yesterday: 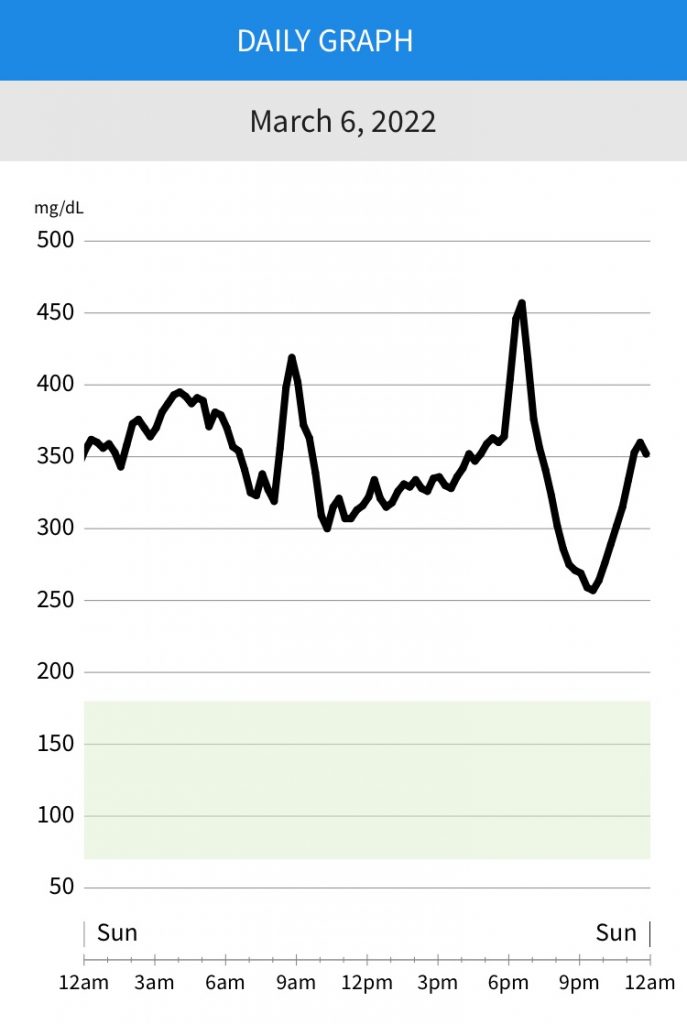 Better … less dramatic swings, but again, nowhere near target. You can see the wide variation between days. She’s fed morning and evening, and gets her insulin injections at meal times, with no other food or treats.

Oddly, she has a very muted response to meals, generally going up only about 100 points or so before quickly falling back.

Speaking of meals, Dolly has a voracious appetite. When she knows it’s mealtime, she starts barking, whining, and finally jumping up and down in excitement! The rest of the day she’s very quiet and calm, but at breakfast and dinner, she becomes this whirling dervish of joyful anticipation.

That’s all for now. We’ll know a lot more after tomorrow’s appointments.