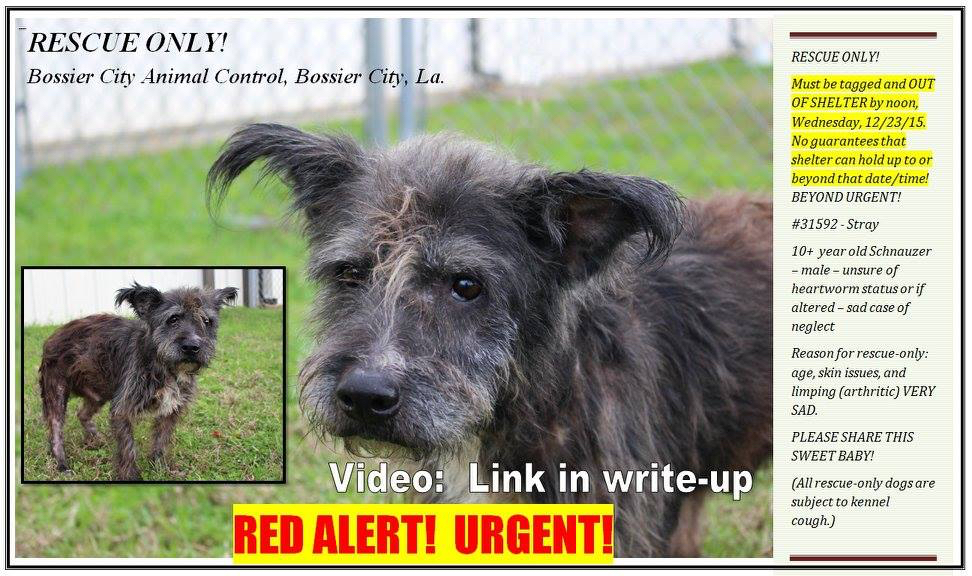 This one is a heartbreaker. Sorry to do this to you on a Monday.

In early January a local rescue group in Louisiana had asked if we could take this dog they had named Fletcher. They had pulled him from their municipal shelter the day before he was going to be euthanized, just before Christmas. No other group would step up to help him.

The dog walked with a pronounced limp on his right front leg, seemed to be in pain, and had a terrible hair coat — as you can see from that flyer above that the shelter had put out.

They took him to their vet, who diagnosed the skin problem as a flea allergy — which promptly cleared up with a couple of medicated baths. The vet diagnosed the limp as from?a ruptured disc in Fletcher’s neck, and he saw other disc problems in X-rays of his spine. Fletcher looked and walked like a very elderly dog, but the vet thought he was only about 5 years old. Fletcher had endured a very rough life.

The vet’told the rescue group that the dog needed extensive medical work. They didn’t have the funds for it, and that’s when they contacted us.

In the meantime, their vet had prescribed pain meds and an anti-inflammatory to help make Fletcher more comfortable.

We agreed to take him, and got in touch with our pet transport company, TLC Pet Transport. TLC was able to get him on the schedule for a pick-up on January 26th. The rescue group had one of their foster home volunteers take Fletcher and care for him until our transport could get there.

On Friday, January 22nd, the rescue group leader and the foster took Fletcher back to their vet for another exam for his interstate health certificate for transport.

The TLC Pet Transport driver, Liz, got there as scheduled on the 26th to get Fletcher. A couple of hours into the trip, about 8 p.m. our time, Liz called me and asked, “Were you expecting this dog to be ambulatory?” I said, “What?!?” I told her we’d seen a video of him walking, he’d just had his health cert done, and no one had told us he wasn’t able to walk.

Liz said that when the foster handed Fletcher over to her, she mentioned that he had lost the use of his hind limbs in the past couple of days and had become?”grumpy.”

Liz told me that he seemed very painful and would snap at her when she tried to handle him. She said he would eat and drink out of her hand and would be fine, but when she tried to take him out of the crate for a potty break, he’d get snappy. She’d have to hold him up so he could pee. If she set him down on the grass on his feet, he’d crumple.

I immediately emailed the head of the rescue group, told her what I’d just learned, and asked her what was going on. She said this was news to her, and that when she’d seen Fletcher on Friday for his vet exam, he was walking around the exam room. I told her that if we’d known he had suddenly lost the use of his back legs, we would have told them to take him right back to the vet … and not send him?on a days-long transport to New Hampshire. She said she agreed, and I could tell she was upset by what had happened. As far as we can tell, the foster didn’t tell anyone else, and was apparently just hoping that whatever was wrong with Fletcher could be fixed when he got to us.

Early the next morning, I had an email from Liz on the road, saying “Please call me when you get up.”

She told me Fletcher had had a bad night and wasn’t sure what she should do. I had already emailed our veterinary surgeon, Dr. Kurt Schulz, about Fletcher earlier as a heads-up, so I called him with Liz’s update and to tell him I thought we should have Liz take him to a specialty hospital en route for immediate care. Given Fletcher’s condition, I knew he needed advanced veterinary care, with a board-certified surgeon and neurologist if possible.

He agreed, and within minutes online I found just what we needed: A 24-hour emergency veterinary hospital and specialty center in Richmond, Virginia called Dogwood Veterinary Emergency and Specialty Center. It was right on Liz’s route, and as is it turned out, also where Liz lives! Dogwood not only has on their team every kind of specialist in veterinary medicine, but also an onsite MRI. I called Dogwood, explained our situation, spoke to one of their emergency room doctors, and emailed her all the info we had on Fletcher. I filled out forms online and paid for the estimated costs of his initial care. These folks were incredibly kind, helpful and supportive. It’s an amazing place.

Liz got Fletcher to the emergency room there that evening, and they put him on additional pain medications and an IV drip. After a thorough exam, the emergency?doctor called to tell?me Fletcher definitely needed to see a neurologist. The next morning, they transferred him to neurology. About 9:30 that morning, the neurologist called to say he had examined Fletcher and was perplexed by what he’d seen. He couldn’t attribute the limping front leg to a ruptured disc in the neck, and that didn’t explain the loss of his back legs. Something else was going on. He wanted to do some more imaging to get a better idea. I agreed, and had already told the neurology team that we would do anything they thought Fletcher required.

Two hours later, the neurologist called back. His tone was very somber. I could tell something was very wrong.

He?had found that Fletcher was limping on his right front leg because of advanced osteosarcoma (bone cancer) in his shoulder that had eaten away the end of the long bone (the humerus). The flesh around it was also “angry” and compromised by the cancer. The end of the humerus was, in fact, gone. That’s why he was limping. After looking at those images, the neurologist?asked their orthopedic surgeon to review them as well, and they both concurred: In an ideal world, they might operate to remove Fletcher’s leg and shoulder, but the cancer had most likely spread … and to take that leg off on a dog who is already paralyzed in his hindquarters wasn’t an option. The neurologist said he suspected that the osteosarcoma could have?migrated to Fletcher’s spine, which may have been?what had caused him to lose his hindquarters. Even if he found something else in his spine that might have caused the paralysis and could do neurosurgery to fix it (he was also a neurosurgeon), it would not address the advanced osteosarcoma at the other end.

At the conclusion?of a long, painful conversation, the neurologist and I agreed that the only reasonable option we had for Fletcher was euthanasia. It was time to let this little guy go in peace. He had been through enough.

I got off the phone, crying. I couldn’t believe Fletcher’s journey was ending like this. Alayne came in?and?hugged me. She’d overheard the conversation and knew where it was headed.

The neurology team emailed authorization forms for euthanasia, which I signed and sent back. I asked them to call and let me know once the neurologist had completed the procedure. About 15 minutes later, they called. It was over. Fletcher was gone.

We paid for a private cremation?and to have his ashes sent to us. We will be spreading them under our apple trees this spring. We never knew Fletcher, but we won’t forget him.

I know some people reading this might be upset with the foster for not saying something sooner about Fletcher’s loss of his hindquarters. Yes, we wished she had. But this lady took Fletcher into her home for three weeks, showered him with love, attention, good food, faithfully gave him his medications multiple times a day, successfully treated his skin condition (his coat became full and beautiful), and — I have no doubt about this — gave Fletcher the best three weeks of his life. The rescue group and foster had taken him to a vet twice, had a physical exam, vaccinations and X-rays done. They were following what their vet had recommended for making Fletcher comfortable until he could get to us.

They did everything they could, and so did we. With dear little Fletcher, it wasn’t enough. But at least everyone tried their best.