You are here: Home / Farming / Haying on the 4th 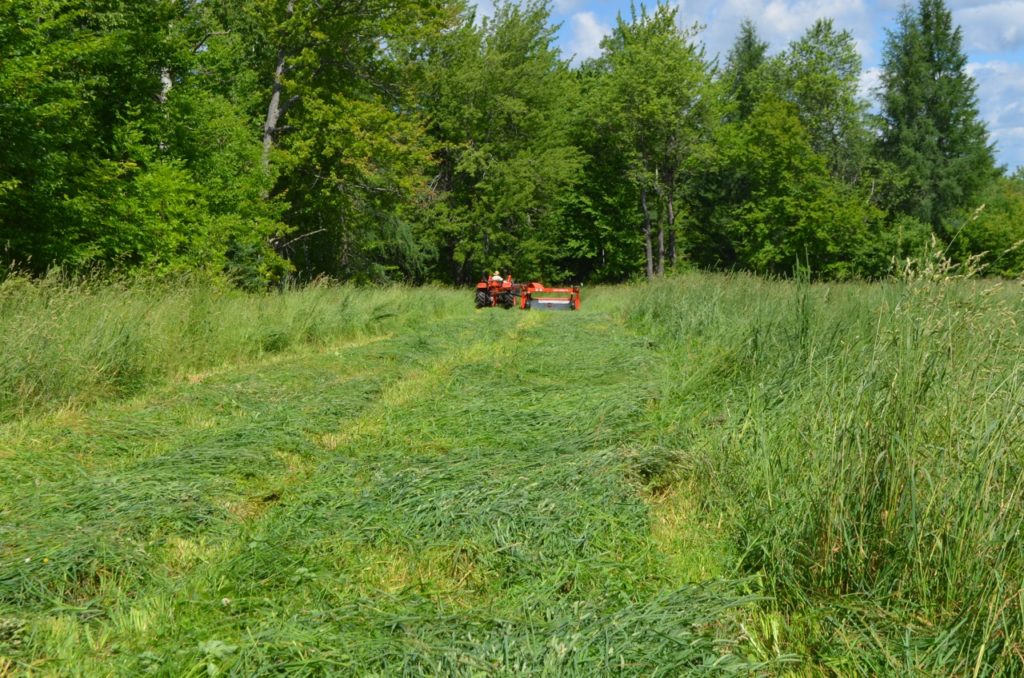 For some reason it seems like almost every July 4th holiday we are haying. We had a decent run of good haying weather earlier in June, but we were too busy getting the gardens in?at that point. So the next window — of course — came over the July 4th holiday?weekend. The forecast started off showing we had five good days — most of them at least “mostly sunny,” if not “sunny.” It was a comfortable amount of time.

But then a day before we were going to start mowing, we had a torrential downpour — over an inch of rain in a few hours. That meant giving up the first day of the window to just letting the standing grass and saturated ground dry out before we could mow. Still, we had four days left — a little tighter than we liked, but we had to go for?it — the grass was three to four feet high, and starting to lodge (fall over) in wind and rain because it was so tall and heavy.

Alayne took these first two photos of me mowing the field on the 3rd. The sun was coming in and out of clouds, which is not ideal — you want full sunshine to start drying out the grass. But you work with what nature gives you!

You can see how tall the grass was looking across the field: 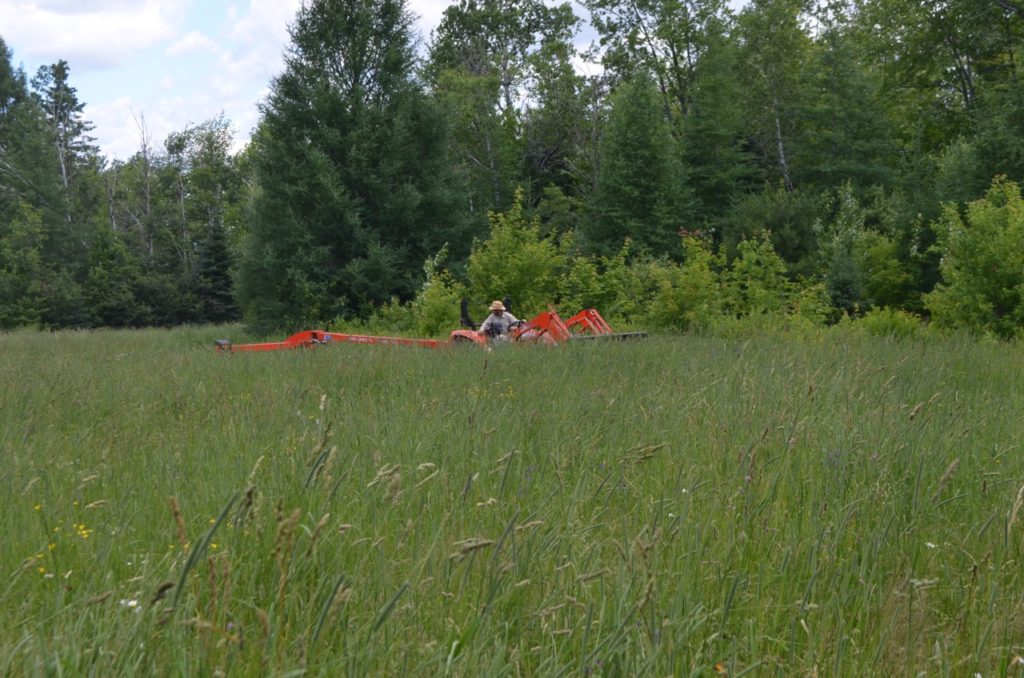 The next day we tedded the field, which means picking up the mown grass and scattering it up in the air and across the ground so it gets stirred up, exposing more of the grass to the sun. I tedded in the morning and Alayne tedded in the afternoon. It turned out to be a hot, sunny day — perfect for drying hay. We would ted the hay once more the following morning, then rake it into windrows for the baler in the afternoon, and bale the fourth day. That was the plan.

The weather forecast still had the same forecast for us, so we had two more good days to go. Or so we thought.

When we got up on the third day, July 5th, the forecast had literally?changed overnight. Now we had a 20% chance of showers that afternoon, and a 30% chance of showers on the fourth day. When you have a field of newly mown hay on the ground, those are not chances you want to take.

Suddenly we had to do everything in one day — ted, rake, and bale. Egads. Plus get it in the barn!

Here I am baling early that afternoon, after we had raked the hay into windrows: 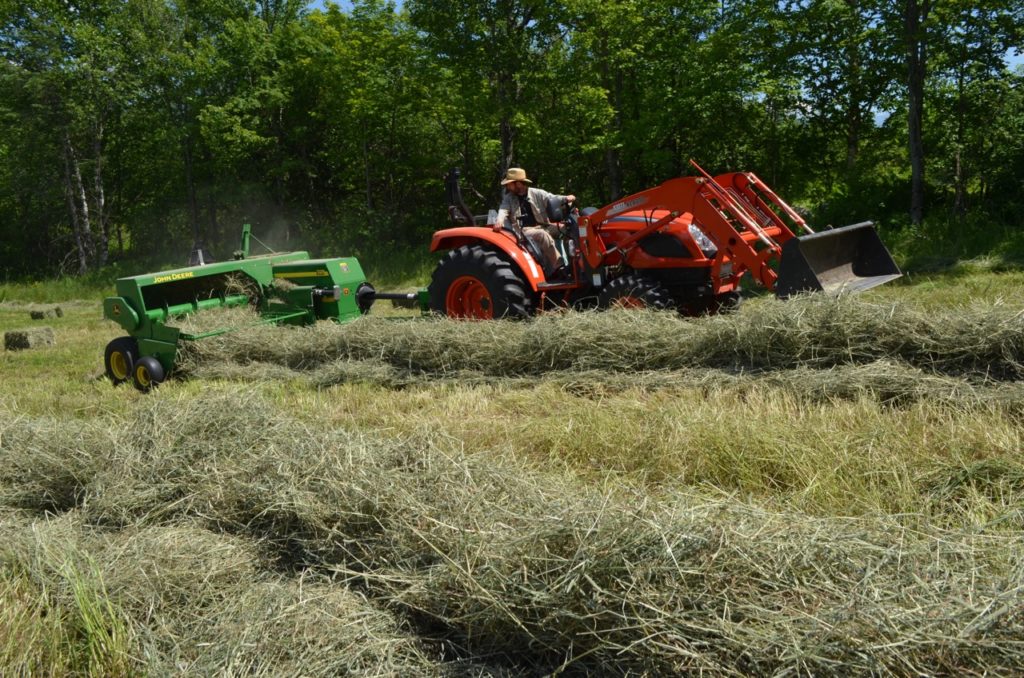 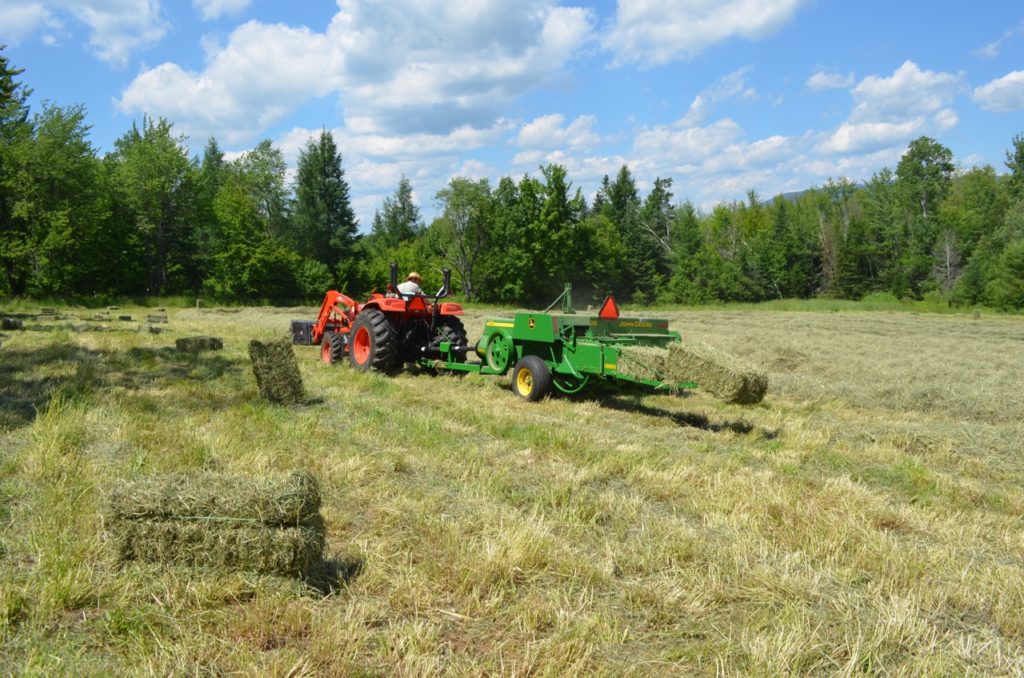 I could tell within the first few minutes of baling, as I heard the baler “click” every time it ejected a new bale from the machine, that we were going to have a lot more?bales from this field this time. Last year we had about 200 bales on the first cutting, which is a comfortable number for the two of us to get out of the field and into the barn. This was a field we had renovated a few years ago, turning from overgrown shrubby ground back into the productive hayfield it had been decades ago. So every year it was getting more productive, thanks to lots of manure spreading.

As I began baling, Alayne pulled the tractor with the hay trailer into a corner of the field, ready to start moving bales onto the trailer.

By the time I finished baling, the baler counter showed 309 bales. I looked across the field, dotted with the bales, and groaned. It was already late afternoon, and we had a long way to go. Normally I would have been delighted with the dramatic increase in productivity, but given the hour, I think I would have been happier to see just 200 bales laying on the ground!

Thus we began the hard part of putting up hay: Getting the bales out of the field and into the barn. I carried the bales to the trailer and lifted them onto the deck, and Alayne would then stack them. Here she is at work: 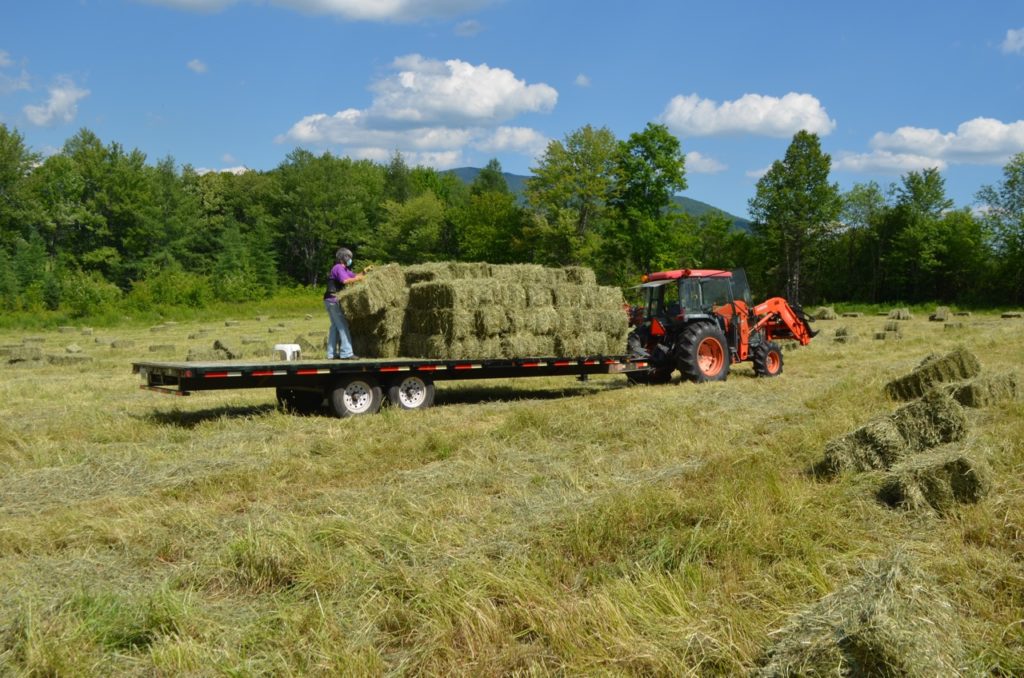 We’d fill that trailer, drive it over to the hay barn, then unload and stack in the barn. Repeat.

Here’s what it looked like after the first load: 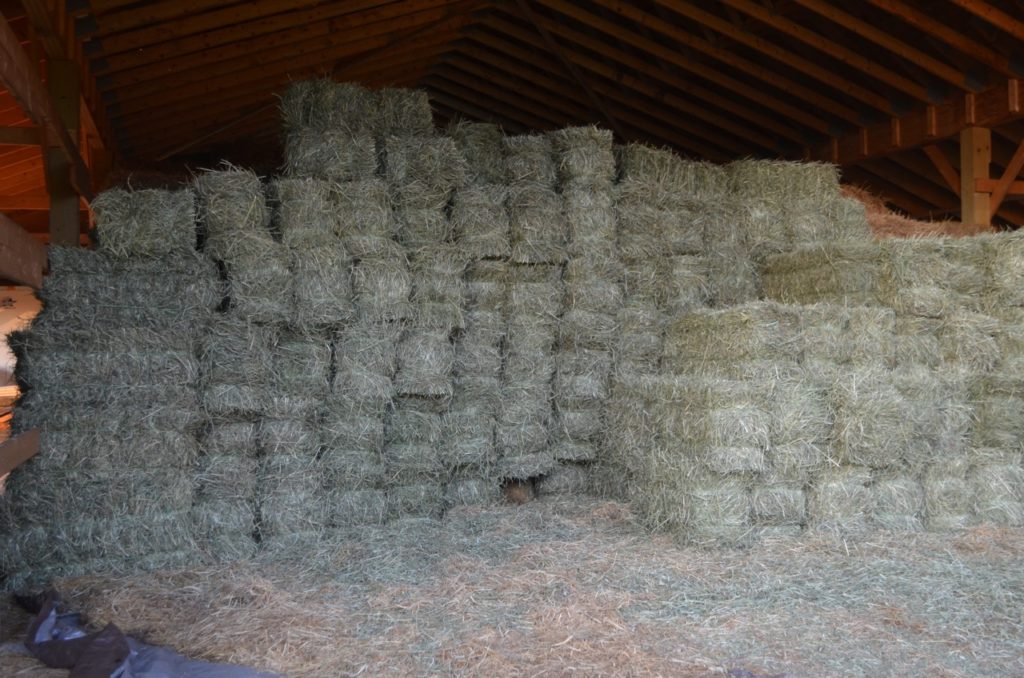 Despite only having three days, the hay turned out to be perfect. Some of the very best hay we’ve ever produced. We were amazed at how great it looked.

For the third and final load, we cheated: We parked the loaded trailer in the side shed of the hay barn and left it to unload another day! It was already 8 p.m., we were beat, and the dogs hadn’t eaten yet.

By the time we got back to the house, we expected to find the dogs banging their bowls on the floor, demanding their dinner. They weren’t too happy with us when we finally showed up, but we pointed out to them that we hadn’t had our dinner, either.

Post-script: Of course — of course! — there were no showers that day. Or the following day, the fourth one in our original haying window. It was another hot, sunny day.

All we could say was: At least the hay’s in the barn!