You are here: Home / Dogs / Happy (Medical) News All Around 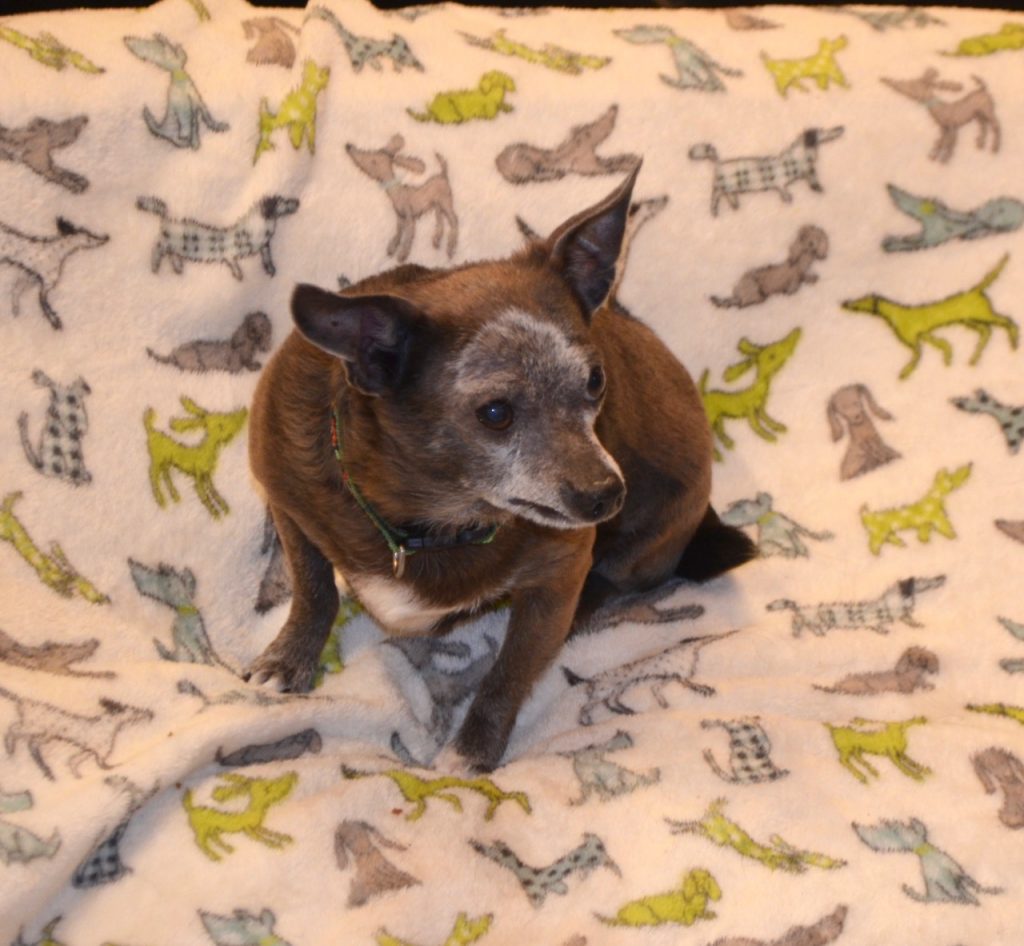 As the year comes to a close, we have some happy medical news to share. First, our little tyke Jake just had a repeat CT scan last week, which showed his nasal tumor is still a fraction of its original size. The white hair on his face and forehead that you see in the photo above is the only sign of the radiation therapy he received six months ago. He is spunkier than he ever was, so we think he was probably feeling the ill effects of the tumor for quite a while before we discovered it. He went from quiet and subdued, when he first arrived, to frisky and outgoing now. It’s really been a remarkable change!

As for Cammie, who had developed extreme lead poisoning after having been shot with both a shotgun and a .22 rifle, her blood lead level is now in normal range. When she first started showing symptoms a year ago (seizures and vomiting), her blood lead level was so high it was literally “off the chart” … above the top end of the range the lab could measure. She was on lead chelation therapy since then, and that — combined with surgery to remove as many shotgun pellets as possible and the bullet — has worked wonders.

Cammie is now off the chelation medication, as well as the phenobarbital she was on to control seizures. She never had any more seizures after starting treatment, and with her current blood level, she is at no risk of further seizures from the lead exposure. We’re going to re-test her lead levels in another month to see if they’ve started creeping back up, and those results will determine whether we resume the chelation therapy. But for now, she’s doing great!

And finally, our newest arrival, little blind Honey, is also doing wonderfully. After having the ridiculously large rock removed from her stomach, she subsequently had a dental with our veterinary dental specialist in Burlington. Honey’s mouth was in such bad shape that she needs most of her teeth removed. The work was so extensive and time-consuming that the veterinary dentist decided to do it in two stages so Honey wouldn’t be under anesthesia for too long a time.  She’s had half her teeth extracted, and her second and final round is scheduled for January.

Honey is just the cutest, sweetest thing we’ve ever seen, and her house manners are such that we call her “Miss Perfect.” In fact, we suggest to some of the other dogs that they should model her behavior (alas, to no effect.) We can’t imagine how Honey ended up as a stray, and why no one claimed her. She lights up our life every day, and is a joy to have around.

All in all, a very happy way to end the year. Alayne and I wish you all the best this holiday season!