You are here: Home / Dogs / Happy Endings, A Decade Later 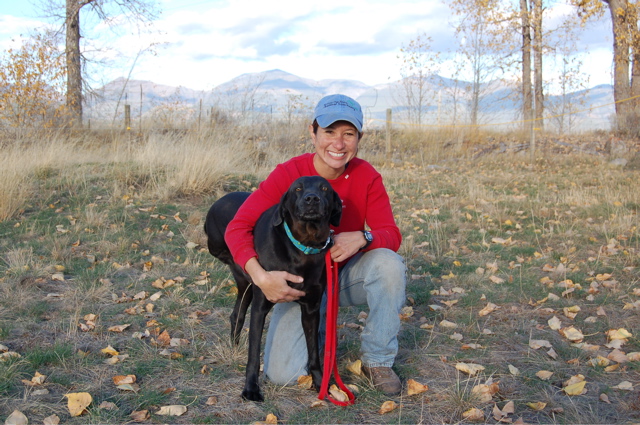 I took that photo in October 2007 of our then-employee, Elena C., and Cotee, a three-legged dog she had just adopted from us when we were at the ranch in Montana. Elena already had one three-legged dog in the family, so Cotee made two! Elena had volunteered at the ranch and later became an employee, and then decided she wanted to go to vet school. So I photographed Elena and Cotee on her last day with us before she began taking the classes at the University of Montana in Missoula she would need to apply to a veterinary college.

Fast forward a bit … Elena went to Ross University on a full-tuition scholarship and graduated with her DVM degree, then moved on to one of the best veterinary schools in the country, Colorado State University, where she earned her Master’s degree, and is now in a Ph.D program at Colorado State in veterinary clinical sciences. Sweet and handsome Cotee, who is now something like 15 years of age, has been at Elena’s side the entire time.

It turned out to be very fortunate for Cotee that Elena became a veterinarian at a prestigious veterinary teaching hospital, because in recent years he developed a series of life-threatening illnesses that required state-of-the-art veterinary care.

In 2016, Elena told us that Cotee “had a gallbladder mucocele and thus biliary blockage and severe dilation. He subsequently underwent a cholecystectomy (gall bladder removal) at the beginning of November. He recovered fabulously…. only to then succumb to what was a bizarre salmonellosis outbreak … then Cotee became septic … and I really thought we were going to lose him. But… we aggressively medically treated him, and…. he is back on track, surviving that too!”

Elena told us that “Fortunately, the faculty and surgeons who were on his case at CSU were the world premiere specialists for his specific ailments.”

In 2017, Elena wrote to tell us that Cotee “had an acute bacterial pancreatitis episode. He gradually recovered. Then about a week and a half later, he had a neurological episode and all of a sudden couldn’t use his remaining rear limb (he could feel it/pain, but he couldn’t voluntarily move it), and he had a fever and was lethargic. Another long story short… We think he had/has diskospondylitis, potentially from his bacterial pancreatitis episode or perhaps a smoldering bacterial hepatitis (blood cultures positive). But he, again, pulled through after starting treatment; his fever went away. And little by little, tiny baby steps, he started regaining partial use of his rear limb (water rehab therapy photos attached!), acting Cotee-like again/happy-silly-boy, eating, etc. Then… at the end of July, several weeks after his neuro/fever incident, all of a sudden he lost his appetite and was lethargic again. ARGH. His hepatobiliary values went sky-high again, similar to his values prior to his gall bladder removal in November. So we switched antibiotics, with the presumption that he did have a smoldering bacterial hepatopathy and needed big-gun liver-penetrating antibiotics. And within a couple of days, he again recovered! And lo and behold, it’s been almost a month now, and he’s doing great!”

Can you think of a better place to work than Colorado State’s veterinary teaching hospital with a beloved dog going through all this?

Here’s a photo Elena sent of Cotee in his water rehab therapy pool: 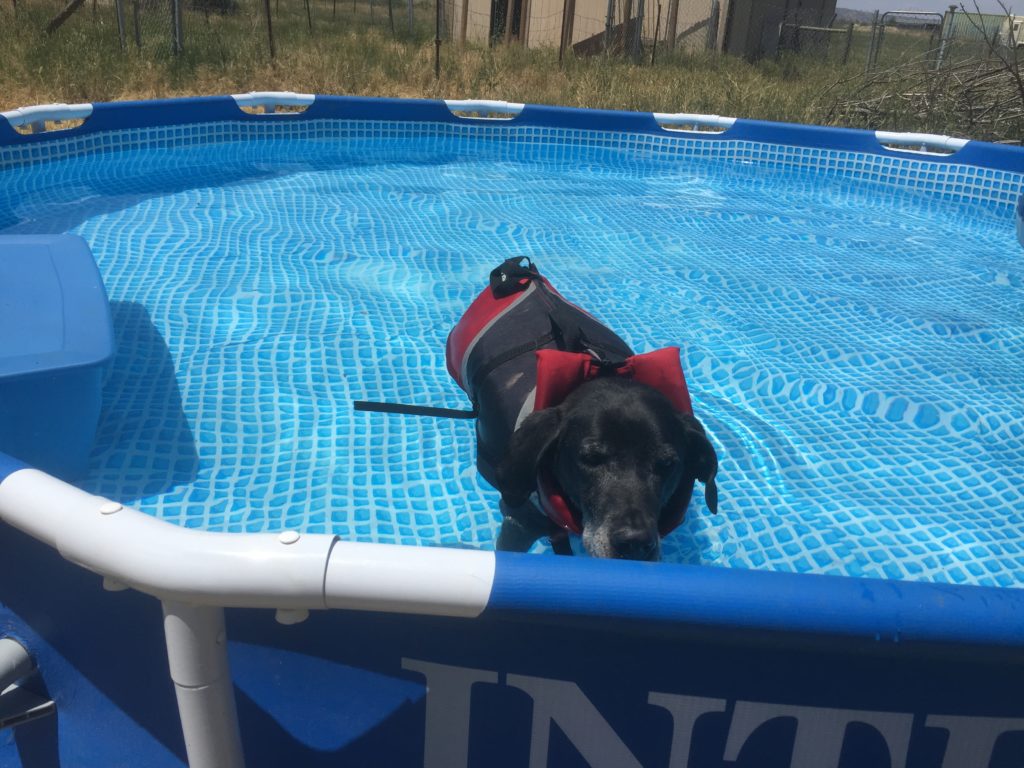 And a year later, Elena tells us Cotee is still happy and healthy in 2018. She says, “Cotee is doing fantastic. He even still does a happy-excited-bark-dance for mealtime.”

Here’s a photo she just sent us of the two of them together so I could include it on the blog: 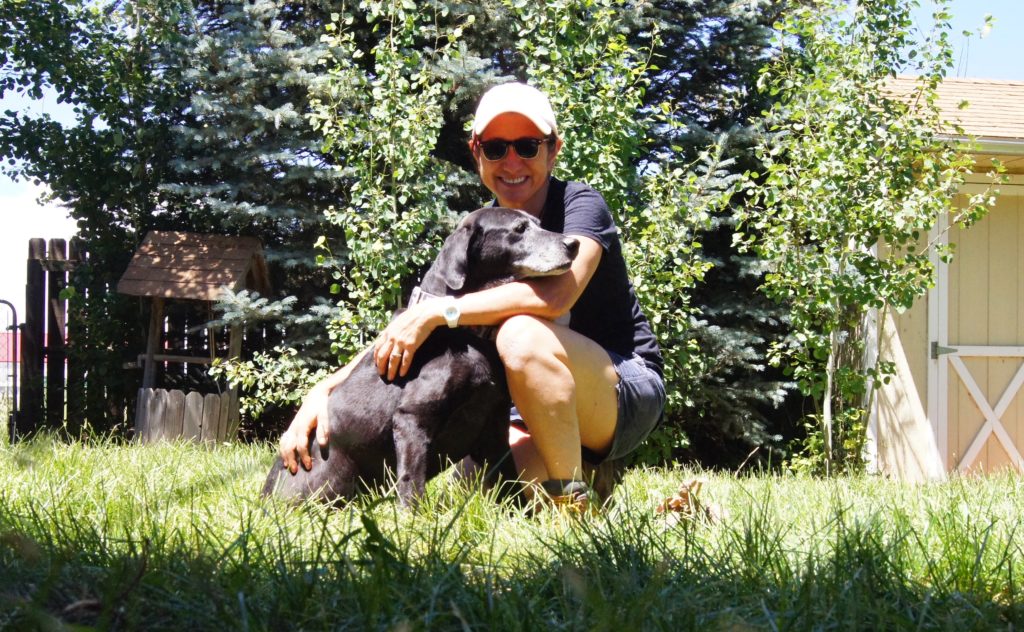 Elena was working in the garden pulling weeds this summer and took this photo of Cotee “helping” her with some encouraging woofs: 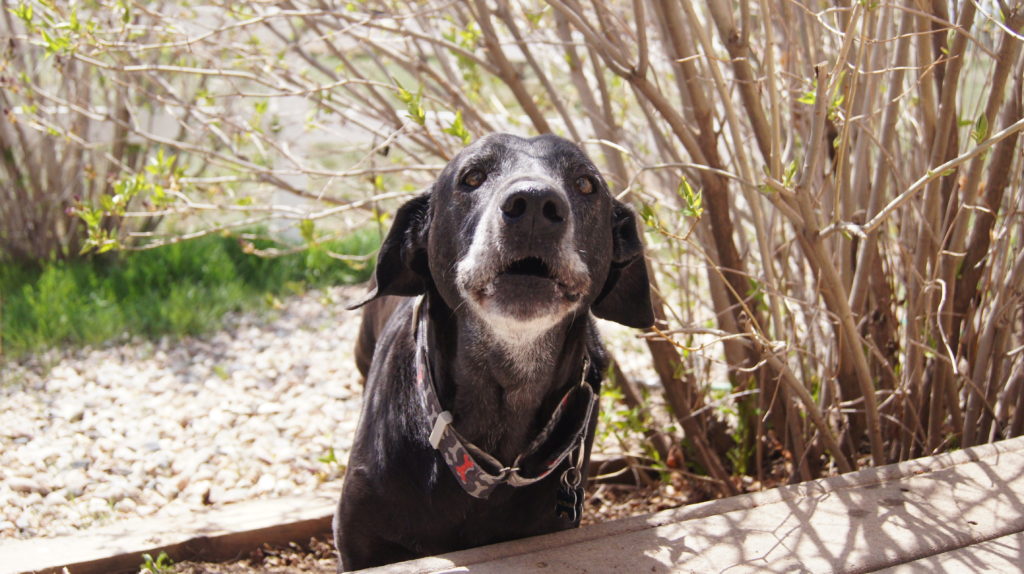 (I realized in looking at the photo above that Cotee and I have something in common: We both have gray chins now.)

So there you have it … a wonderful happy ending, still going strong over a decade later!