You are here: Home / Dogs / Finding The Balance 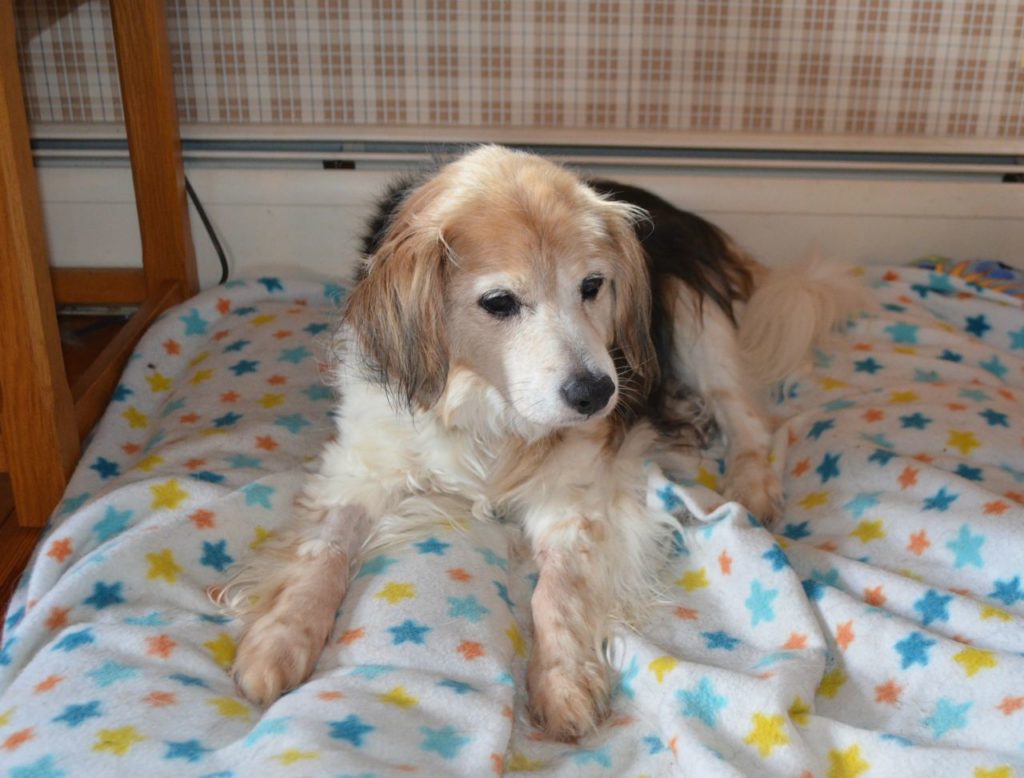 I thought I should do a quick update on Esther (a.k.a. “Mopsy”), the elderly deaf girl who came to us a year ago from upstate New York. I took that photo this morning of her in the living room. She’s blind in one eye, is covered in lumps (all just fatty tumors so far!), and has some neurological deficits in her limbs. She’s had a number of visits to our veterinary specialists in Burlington, for example here?and here, as well as subsequent visits. In the course of those?ongoing diagnostics, we learned Esther had diskospondylitis, which is an infection in her spine. We’ve since successfully treated her for that. She also had some seizures, though we don’t know if she’s experienced’these off and on for years or whether this is a new development. We don’t have any history on her before she showed up as a stray at the New York shelter.

Because we were concerned her seizures had increased — though still not frequent — our veterinary internist?had started her on a medication called Keppra. It needs to be given three times a day, every eight hours, which really stretches out the day, as you can imagine! Esther is not a dog we?can give a pill by putting it down her throat; she can be quite snappy with her mouth. Even though she’s not aggressive in any way, she doesn’t like having her mouth handled and reacts by biting down. (Ouch.) Fortunately, she would take her pills in food, which worked for several months.

But in the last few?weeks, she became more and more difficult about this, turning away from almost every food imaginable (yes — hot dogs, bratwurst, deli ham, roast chicken, peanut butter, you name it, we tried it). It would take Alayne 15 to 30 minutes, sometimes longer, to try and get her meds on board. (There is an injectable form of Keppra but it is on long-term back-order and essentially unavailable.) She also stopped eating her regular meals consistently. We had her on an appetite stimulant as well as an anti-nausea medication as a preventative, but these no longer seemed to be helping. We had also noticed she was losing her spark … she just wasn’t as bouncy or vocal or happy as she used to be. More subdued, less energy, less herself. She used to follow Alayne around the house, bouncing along and woofing behind her as she went (hence her nickname, Flopsy Mopsy). We hadn’t seen that in quite a while. Last week, after 24 hours of failing’to get her to eat anything, we took her back to see Dr. Dani Rondeau at Peak in Burlington for more tests.

We also wanted an oral exam to make sure there wasn’t a tooth problem or some other kid of mouth issue that might make her not want to eat. The oral exam revealed no physical reason that would make eating uncomfortable. I was mortified to learn that even under sedation, Esther managed to clamp down and bite Dani’s finger during that exam! As Dani diplomatically wrote up in her summary, “No significant oral or pharyngeal abnormalities were found on exam. She demonstrated excellent masticatory muscle tone on the examiner’s finger during sedation.”?All of Esther’s other tests were pretty much normal.

The sedation really knocked Esther out, and for the rest of that day and the following day she slept most of the time, getting up only occasionally to drink. By Friday she’d gone for several days without her seizure medication, and yet did not have any new episodes. She finally began showing interest in food again over the weekend, and her bouncy, happy self slowly started to re-emerge. We began to wonder if the cumulative effect of the Keppra itself had, over time, contributed to the change we were seeing in Esther. While the veterinary literature seems to suggest few side-effects, the list of potential side-effects for humans taking Keppra is quite lengthy.

We clearly don’t know if the Keppra had anything to do with it. For us, it’s a question of trying to balance her quality of life with her medical condition. For the moment, we have decided to leave her off the medication and see what happens. Esther is also, we think, a very old girl — with no history we don’t have an?exact age — so to what extent age is playing a role here we also don’t know. In any case, she seems right now’to be rebounding, and we hope this continues.

(In retrospect, this wasn’t such a “quick” update after all!)