You are here: Home / Dogs / Esther Gets Checked Out 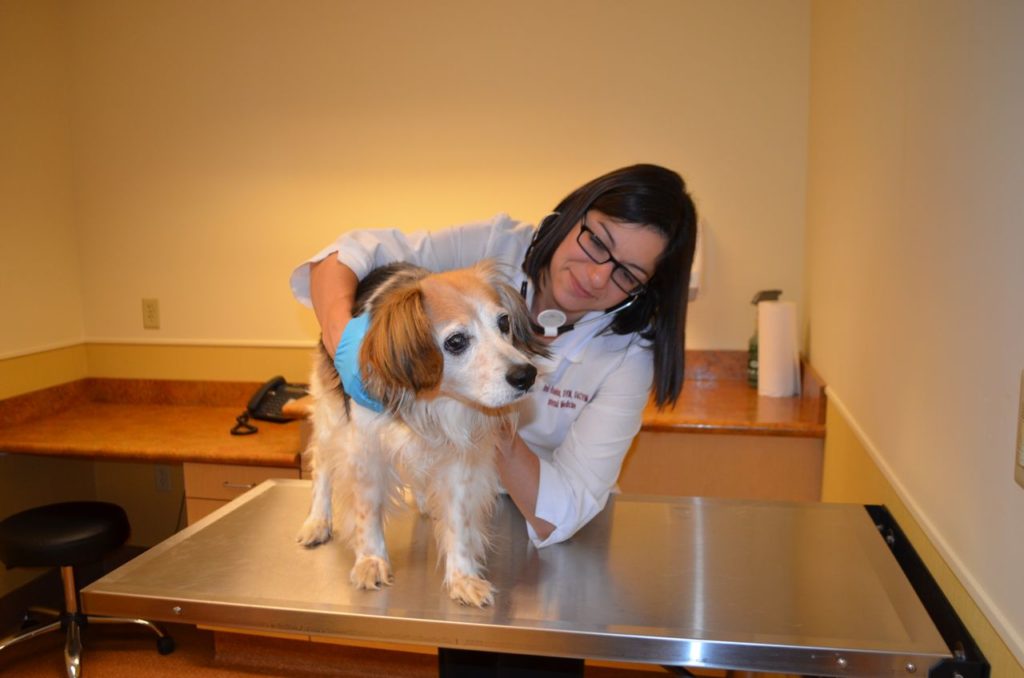 I took our new arrival, deaf Esther, to Peak Veterinary Referral Center in Burlington on Thursday to get the complete medical work-up. Her first stop was with?our internal medicine specialist, Dr. Dani Rondeau, who you see in the photo above. Then came the cardiologist, ophthalmologist, radiologist and surgeon.

During his initial exam, our cardiologist, Dr. Don Brown, listened to Esther’s heart with his stethoscope for what seemed like an eternity. He put the stethoscope in several locations, on each side of her chest and along?her side, listening intently. Finally, he sat up, turned to me with a serious look on his face and said, “Well, that’s something I don’t hear very often.”?I asked, suddenly very worried, “Oh no … what?”?

“A normal heart,” he said, suddenly grinning. I was so relieved and just had to laugh. Her heart sounded so normal, in fact, that Don found no need even to do an echocardiogram. And that’s pretty much how it went for Miss Esther on Thursday — she turned out to be in much better shape than we thought she would be.

After doing aspirates, Dani found that all of Esther’s?lumps and bumps turned out to be lipomas or other benign growths (and she had a lot of them). Esther’s blood work was also unremarkable, and so was her urinalysis. The radiologist, Dr. Lynn Walker, told me that?just based on how all Esther’s?organs looked on ultrasound she would have thought she was looking at a dog who was only 5 or 6 years old.

I’told?Dani we noticed Esther’seemed to have’some weakness in her rear legs. Sure enough, during her neurological exam Dani?confirmed?Esther?had some neuro deficits in her hindquarters, particularly in her left rear leg. Dani asked the surgeon at Peak, Dr. Kurt Schulz, to examine Esther and see if he thought we needed to do further diagnostic imaging of her lower spine (either a CT scan or MRI). After his evaluation, Kurt told me that Esther definitely had some spine-related deficits in her rear legs, but she was not in any pain, it was not causing her any difficulty in walking and it wasn’t?otherwise compromising her quality of life. Without knowing her history, Kurt said we should just wait and see if this progressed at all. If it did, then further diagnostics would be in order.

Our ophthalmologist, Dr. Sarah Hoy, confirmed what the shelter vet had diagnosed Esther with: KCS or dry eye. Her right eye is blind — though the retina is working fine, her cornea is covered with the black film caused by KCS. Her left eye is still visual, fortunately. Here’s Sarah doing part of her exam while her vet tech Christine holds Esther: 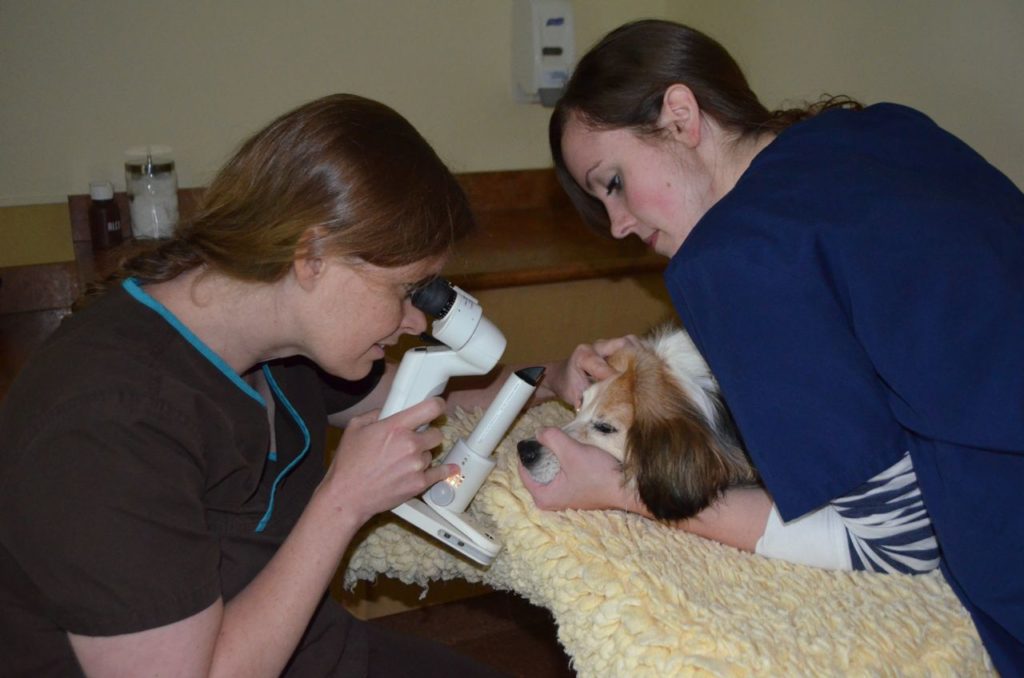 We’ll keep Esther on her current regime (cyclosporine and artificial tears) for the next 6 weeks, and if we don’t see any improvement in the inflammation in her right eye (the sclera is bright red), we’ll switch her to a different medication. If that doesn’t work, we may have to remove the eye at some point. Her left eye is comfortable and so far we seem to be keeping the KCS at bay.

All in all, a pretty good report card on this girl!

The second round of the Shelter Challenge for 2014 is underway. You can vote every day at?http://www.shelterchallenge.com/. To search for us, type in our name, Rolling Dog Farm, and Lancaster, NH 03584. We’ve won thousands of dollars in the previous contests, so your daily votes do bring in serious money for our disabled animals!