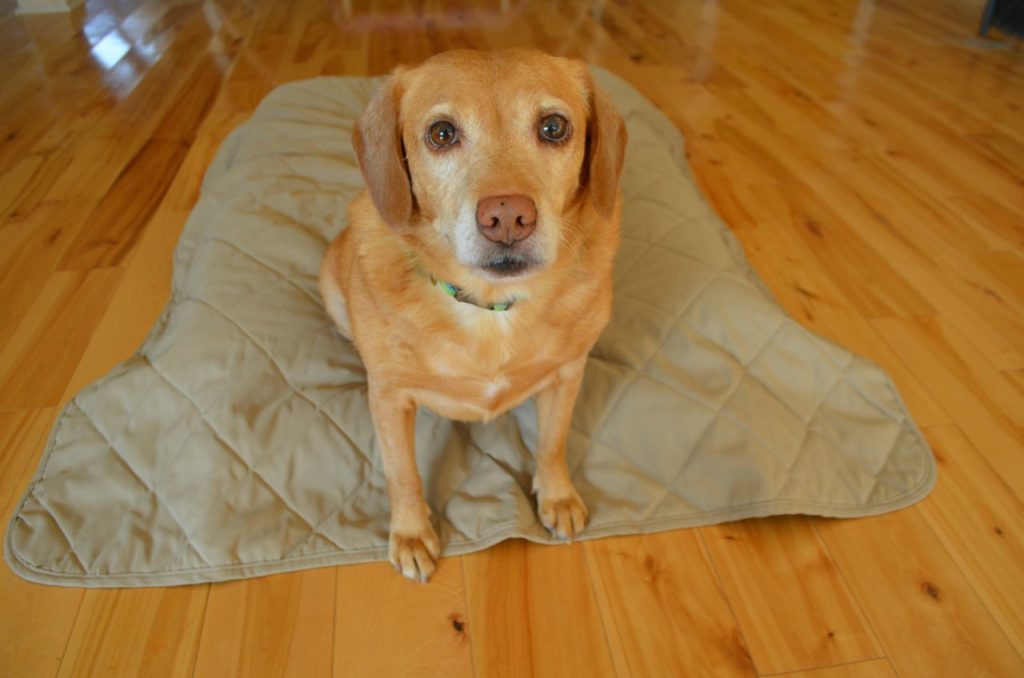 We lost Darla unexpectedly just over a week ago. We’re still coming to grips with her loss. She was, as long-time blog readers know, the light of my life and yes, my favorite dog ever. She had a hold on me that no other dog has ever had.

I was going to wait to write this for our next monthly blog post, but decided I needed to do it now. So here goes.

I had discovered another mast cell tumor on her chest a few weeks ago, and scheduled what would have been her sixth surgery at Peak Veterinary in Burlington to remove these recurring growths. Because of her liver and kidney disease, I had our local clinic run a full blood panel on Darla the week before the surgery. The clinic emailed the results to me, and I forwarded the results to our new internal medicine specialist at Peak, Dr. Tim Bolton, who is working alongside our other internist, Dr. Marielle Goossens.

I also sent photos of an odd skin thing we had just recently noticed on Darla’s lower abdomen – it looked like blood blisters under her skin, kind of like bruises. Or like a few red splotches. We thought this might be from abrasion as she plunged through our crusty, icy snowpack here. She loved bounding through the snow, and we had enough freezing rain on top of snow this winter that there were layers of ice embedded in the snow. We assumed this might be what was causing these skin patches we were seeing, because they’d come and go after a few days.

I noted in the email to Dr. Bolton that the lab results said “decreased platelets” but didn’t give a score, which I thought was weird.

Two hours later, he called and said, “I need to see her first thing tomorrow morning.” Dr. Bolton said he was concerned Darla had an autoimmune blood disorder called immune-mediated thrombocytopenia, in which the dog’s own immune system is destroying the platelets in the blood. (From Wikipedia: “Platelets, also called thrombocytes [thromb- + -cyte, “blood clot cell”], are a component of blood whose function [along with the coagulation factors] is to stop bleeding by clumping and clotting blood vessel injuries.”)

I rushed her to Peak the next morning, and a new round of blood work showed she now had zero platelets in her blood. Not one.

We were dumbfounded. She had been her usual active, energetic, bossy self, running through the snow, chasing Tanner, and demanding treats whenever she felt like it. Dr. Bolton told me that there can be a lag between the destruction of platelets and how a dog is appearing. Often, he said, there’s no indication until the dog starts bleeding. The skin bruises we saw were unusual but in Darla’s case, the initial signs of the disorder.

Immune-mediated thrombocytopenia (or IMT) is obviously life-threatening and requires immediate, aggressive treatment. The first thing is to suppress the immune system to stop it from attacking the platelets. This was very risky for Darla because of her compromised kidneys and liver, and Dr. Bolton warned me that one of the complications was that we could end up making her diabetic during the course of the therapy … but we had no choice. So we began treatment that day, which involved prednisone, a one-time injection of an IV chemo drug called vincristine, and cyclosporine. We also did an ultrasound and X-rays, which showed no other internal problems. That was a Friday.

The next Monday, I was back at Peak for a recheck. Her platelets were up to 15,000. Normal range is more like 200,000. So she had a blood transfusion to give her a boost, and by the end of the day she was up to about 30,000. Every other day that week I drove her to Burlington, but despite all the medications, we never got her platelet count above 60,000. A week later, it started declining again. Dr. Bolton believed there was an underlying problem that had not only caused the IMT in the first place, but was preventing her body from responding appropriately to the treatment. But in test after test, we couldn’t find anything else.

A week later, Darla had suddenly stopped showing interest in food, and now was refusing to eat. I had for days been pushing the pills down her throat, because she would never take pills in food (yes, we tried everything), so I had to manually give her the medications, which she did not appreciate. Refusing to eat was a major problem in its own right, but doubly problematic because some of the medications required food in the stomach. Dr. Bolton had us add an appetite stimulant to the mix, but this didn’t change her interest in food.

When I took her back to Peak on Thursday, March 9, we knew she was not doing well … but we were not expecting the news we got. Dr. Bolton came into the exam room with all the results from that morning’s tests and began reading them off to me. As I listened to the numbers, I knew what he was, in effect, telling me. Darla was in multiple organ failure. Dr. Bolton said we had options, but no good options … and while we could keep her going for a while, we’d be right back where we were in a couple of days.

I started crying. I couldn’t help it. I said to him, “So we’re looking at euthanasia? Is that really what we have to do for her?”

We went through all the possible other options, but without knowing what was causing the systemic crisis, we would just be postponing the inevitable. I looked at my beloved little girl, lying on the fleece pad on the floor. She was weak, lethargic, and wouldn’t even raise her head to look at me. She didn’t want to eat, she sure didn’t want me pushing pills down her throat, and I knew her doctor was telling me we couldn’t fix it.

I knew we had to let her go. I didn’t want her to suffer and go through any more of this.

Dr. Bolton left the room so I could call Alayne and tell her. We just sat on the phone together and cried. We’ve had more than our share of grief over the years — it’s what happens when you share your life with so many animals — but some losses hit harder than others. Having to let Darla go was one of the hardest losses of all. We had only had her for a few years, and we wanted so many more.

Thirty minutes after the phone call, I lay on the floor with Darla as Dr. Bolton gave her the drugs that let her die peacefully and quietly in my arms. It was one of the worst days of my life. Alayne and I have been grieving ever since.

Tanner, Millie and the rest of the gang are doing their best to cheer us up, but they know something isn’t right. Tanner in particular keeps looking at us with this expression that seems to say, “Well, where is she?” He and Darla were the only ones out in the living room overnight, and it’s late in the evening, when he’s alone, that he seems to notice her absence the most.

Darla had come to us as a blind dog from a Michigan shelter back in 2013. We were able to restore her vision with cataract surgery. She was the most food-motivated dog I think we’ve ever had, and that’s saying something. She used her new vision to stare at me with a laser-like intensity that made me hand over just about anything on my plate.

She quickly became the princess who broke the rules and then more rules and got away with all of it. Even after I bought a new recliner so she could have the old one to herself, she insisted on taking my new one, too. She’d even try to steal my beer if I let her.

And that’s probably my favorite photo of her — the one imploring me to let her drink some beer. It captures her soft beauty, her personality, and her never-ending desire to bend me to her will. It also reflects one of the rare times when I was, in fact, able to say “no” to that adorable face. So on that note, here she is one last time: 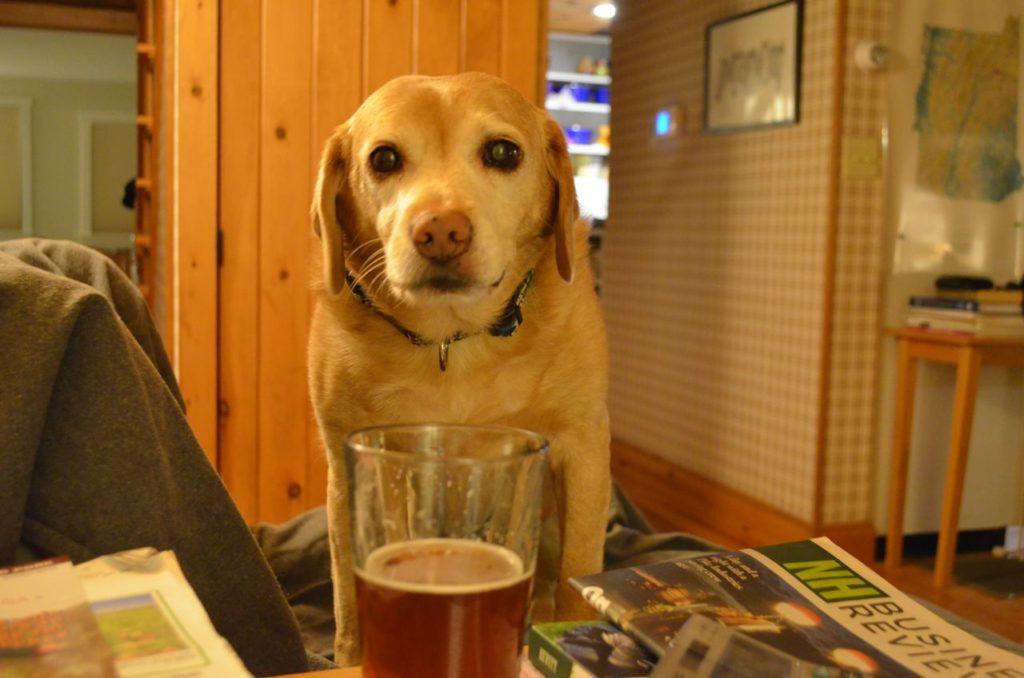