You are here: Home / Daisy the diabetic dog — once blind, now she can see 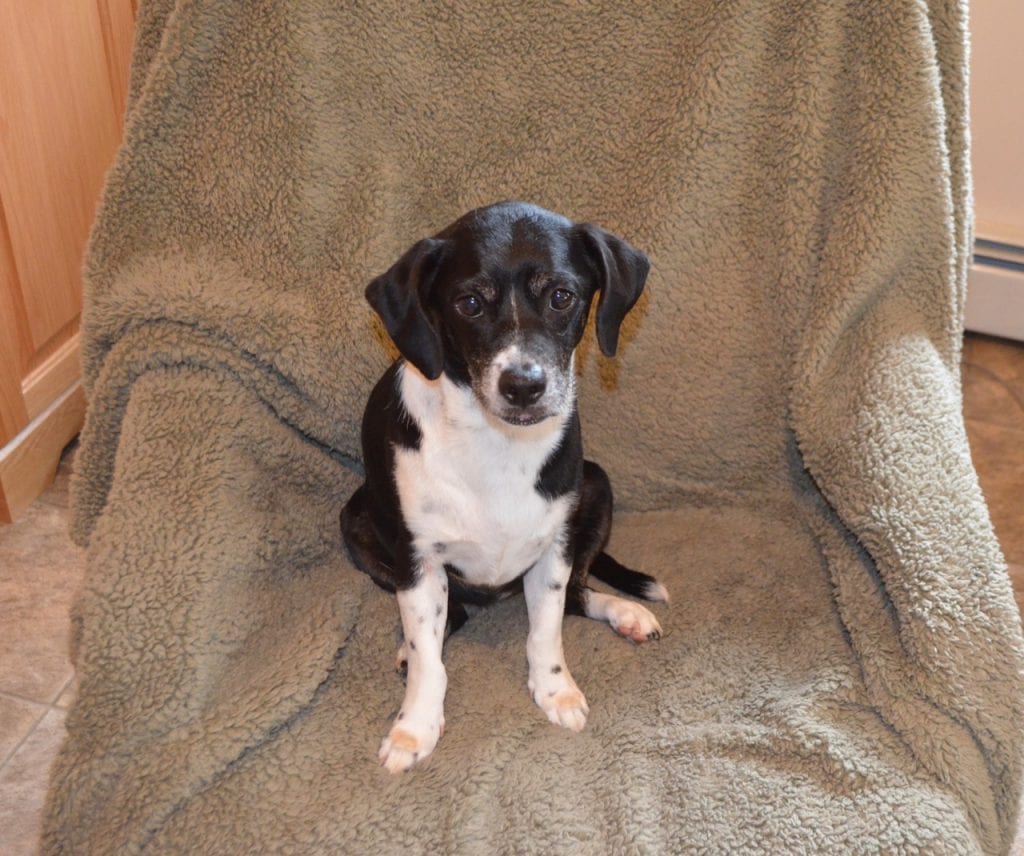 This beautiful little girl almost died the day she came to us.

Alayne had driven over to the Vermont shelter that had asked if we could take a six-year old diabetic dog who was going blind. When the staff member handed Daisy over, Alayne noticed how lethargic she was, but the staff member said, “She’s just a little sleepy right now.”

By the time Alayne got back to the farm, less than an hour later, Daisy was unable to get out of the crate in the van. We pulled her out and set her on the lawn, where she promptly laid down and didn’t move. Once inside the house, she just keeled over sideways on the floor.

Having more than 15 years of experience with diabetic dogs, we thought we knew what we were seeing — a hypoglycemic event, where blood glucose drops dangerously low. Daisy had obviously been starting this at the shelter that morning just before Alayne showed up, and it was a full-blown crisis by the time she got to the farm. We gave her Karo syrup, and within minutes Steve was rushing her to our internal medicine specialist in Burlington who treats our critical care cases.

Daisy was still alive when Steve arrived at the hospital, and the doctor said the Karo syrup had saved her life. Daisy was hospitalized for three days, and we were so relieved when we were finally able to bring her home.

Since then she’s had periodic hospital visits for 24-hour blood glucose curves to adjust her insulin dosages, but so far her diabetes seems to be well regulated. Her diabetes also leads to frequent urinary tract infections — the extra glucose in her urine promotes bacteria growth — and this means we need to do frequent lab tests and treat her when the UTIs occur.

Daisy had cataracts that severely limited her vision, causing her to run into things. Our veterinary ophthalmologist found Daisy’s retinas were still working fine, which made her a candidate for cataract surgery. A couple of months after arriving, Daisy had the operation and can now see perfectly!

In case you’re wondering, Daisy knows she is as adorable as she looks. She also has a personality to match. 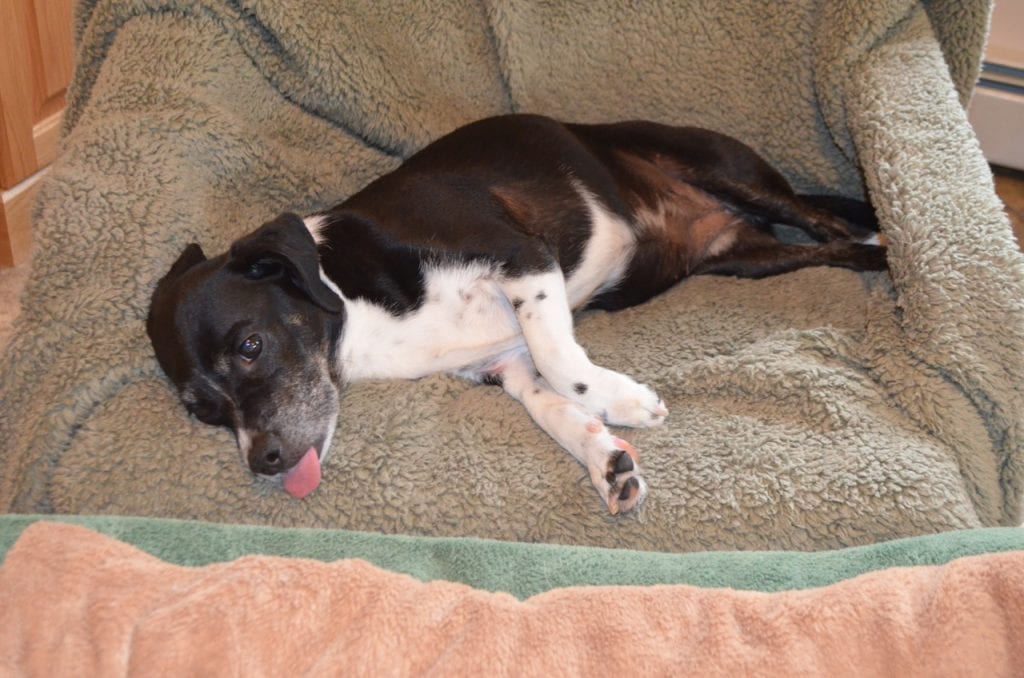 She believes the secret to success in life is to lick your way there, so she greets everyone with a kiss. Her tongue is ridiculously long, and she often has it sticking out of her mouth, which only adds to her charm (or so she thinks). Daisy also sits up to get our attention, which is impossible to ignore because it’s so dang cute. 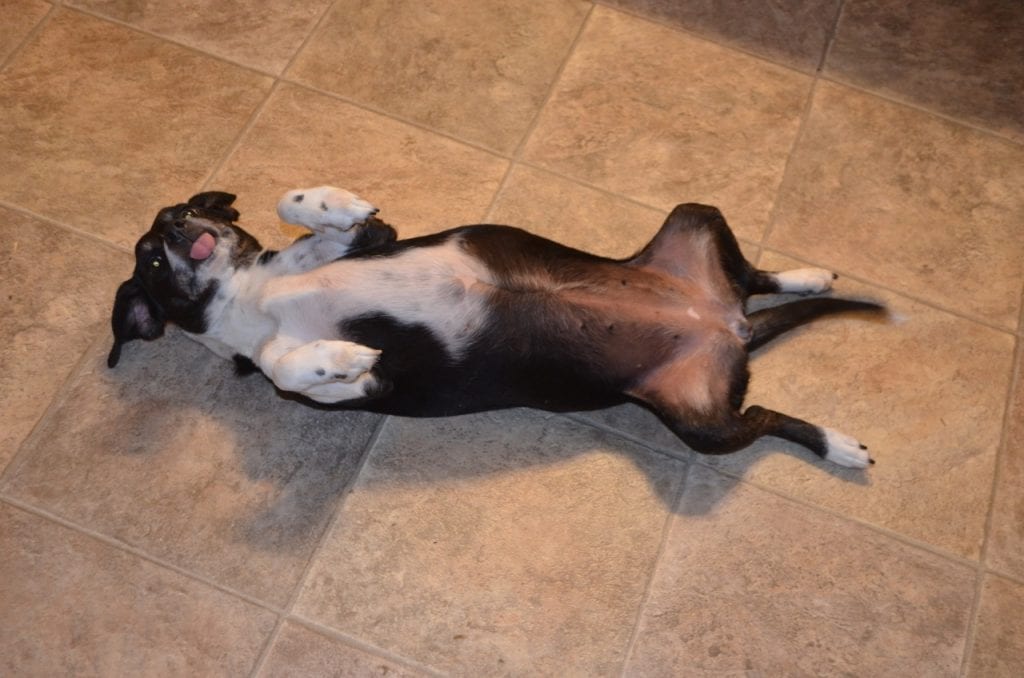 When she doesn’t think she’s getting enough attention, she will run in front of us, throw herself over on her back, roll around, and wait for one of us to come rub her tummy. She knows she’s irresistible. Sometimes, to guarantee she gets the desired tummy rub, she will actually throw herself down at a doorway so we have to stop and pet her before going through. And yes, notice the tongue is out. Who could resist that? 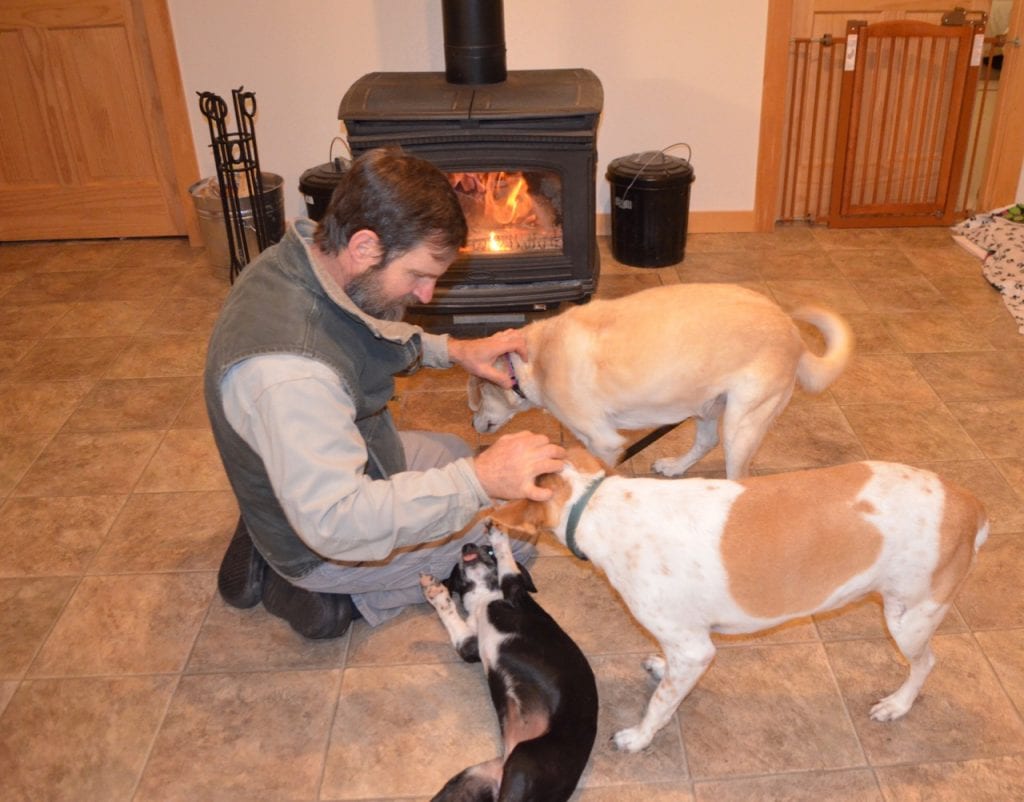 This last photo shows you the classic Daisy.  Millie and Tanner like to come up to Steve for some loving while he’s working at the wood stove, and the fact that he’s focusing on them is more than she can bear. Daisy shoehorns her way into the group, and when she still doesn’t get the attention she thinks she deserves, she does the “roll-over-with-tongue-out” maneuver.  It works every time.