You are here: Home / Dogs / Chasing The Big Guy 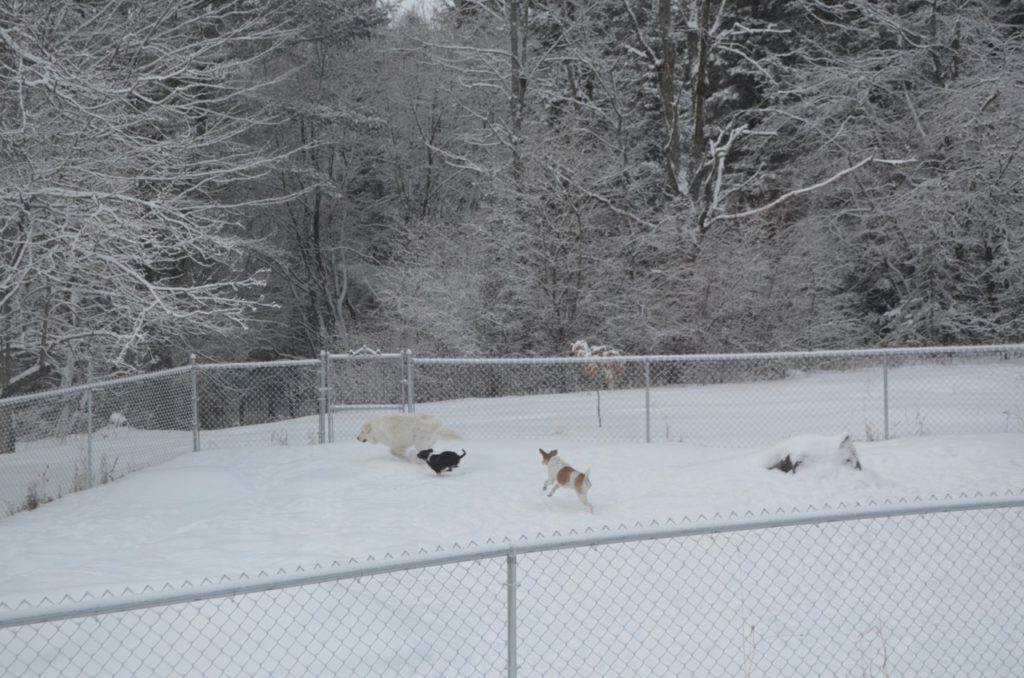 Back at the beginning of winter, our Maremma livestock guardian dog, Aaron, had knee surgery at Peak Veterinary Referral Center in Burlington for a torn cruciate ligament.

He had spent last spring, summer and fall out on pasture, guarding the poultry flock, and he lived in the barn. When we let the chickens out in the morning from their portable coops in the pasture, we’d bring Aaron up from the barn and he’d spend the day protecting the flocks from whatever harm might come their way. In the evening, we’d put the chickens up in their coops, and take Aaron back to the barn for the night. (Never lost a chicken, by the way. A six-acre pasture, unseen from the house, surrounded by woods.)

Well, recovering from knee surgery requires a very clean environment, which a barn isn’t, so Aaron came into the house for the eight-week long post-op phase. He’d had knee surgery once before on his other leg, in 2014, and had to recover in the house then, too. But because that was the first time he had lived in the house, and he was hurting from the knee surgery, he didn’t associate it with good things. Plus, he’d spent his whole life in the barn, and he couldn’t wait to return to it.

Fast forward three years to the next knee surgery, and it was a battle trying to get him into the house when I brought him back from surgery. But I finally coaxed him inside and into the huge pen we had set up on the sun porch for him. (This type of knee surgery requires close confinement for the first phase of recovery.)

He had always been very sweet and gentle with the other dogs in the past, so we had no worries there. And during his earlier post-op house visit he had displayed impeccable house training skills, which is really remarkable for a dog who had never lived indoors before.

This time, during the first couple of weeks, we’d take him out to the dog yard on a leash, and he’d try to pull us over to the gate that was nearest the barn. Then, once he graduated to being off-leash, he’d go and sit in the corner of that yard, staring at the barn. He was clearly sending us a message: “I belong there, not here.” Even though the chickens are in the barn for the winter and don’t really need any protection, he still felt some responsibility.

And then … somewhere about the half-way point in the recovery period, Alayne and I both noticed a very subtle change in his behavior and demeanor. He seemed to like being in the house. He no longer looked wistfully at the barn, and was now quite happy to be inside with us.

He began to look forward to heading outside with Tanner, Millie and Daisy. These were the three he had really developed a relationship with. We could tell he was starting to bond with them. They began to swirl around him, and whenever he was heading outside, well, they wanted to go, too. By the time the post-op phase was over and he could return to the barn, we realized he didn’t really want to go back now. He had shifted the focus of his protective instincts to us and his friends in the house. So we made way for a 130-pound house dog.

At some point recently, little Daisy started playing with him outside. She’d run out in the yard and go straight at Aaron, running circles around him, then take off in a different direction. He’d start chasing her. Pretty soon Tanner began joining in the chase games. But then Daisy and Tanner decided to it was better to team up together and chase the big guy around the yard.

That’s what you see in these photos that Alayne captured one snowy morning. She had to take the photos from inside the sun porch, because whenever we’d go outside and try to shoot from there, the trio would break off the playing and come over to us.

So in the photo above, Daisy and Tanner have Aaron on the run, headed to the corner. Then he abruptly turns around: 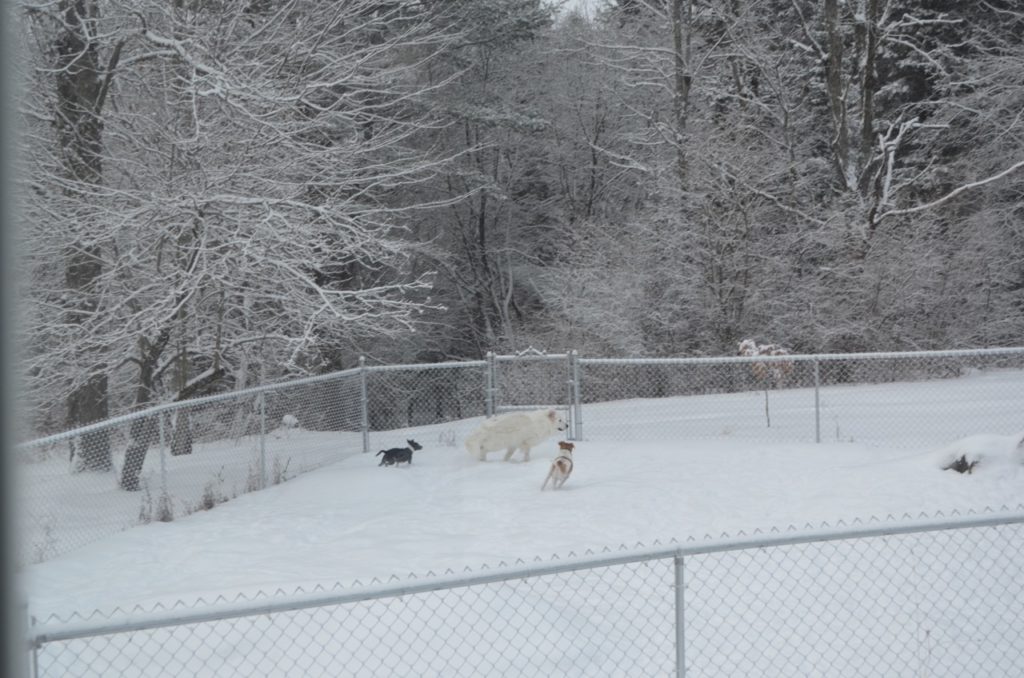 And they’re off again: 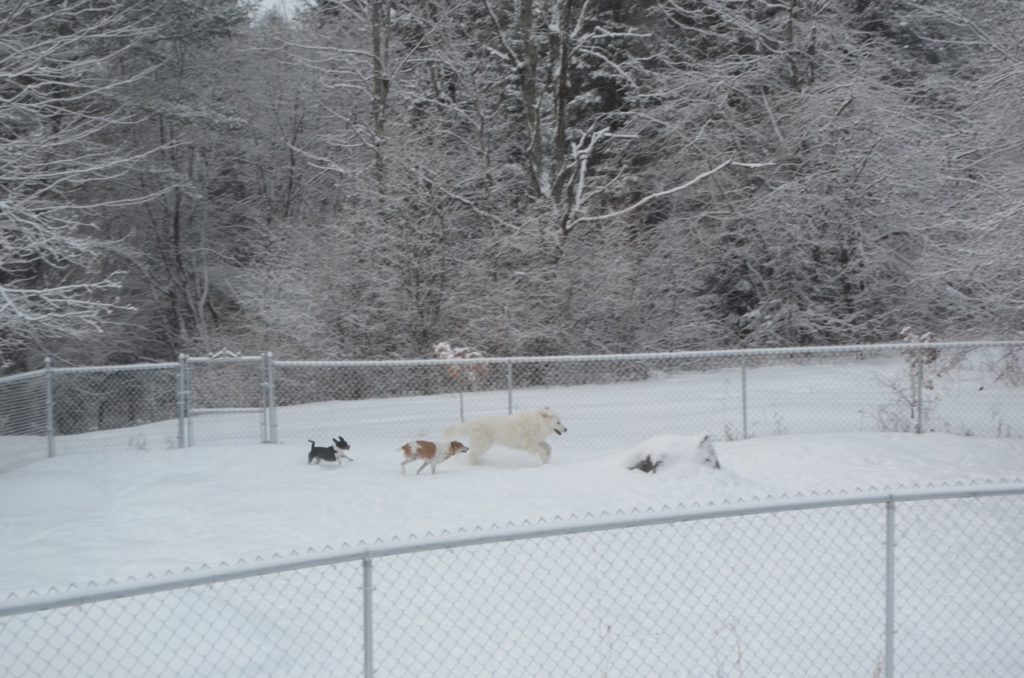 He’s heading to the big rock where he’ll make a turn, with Tanner literally on his heels (not bad for a three-legged dog, eh?):

He uses the rock as a diversion: 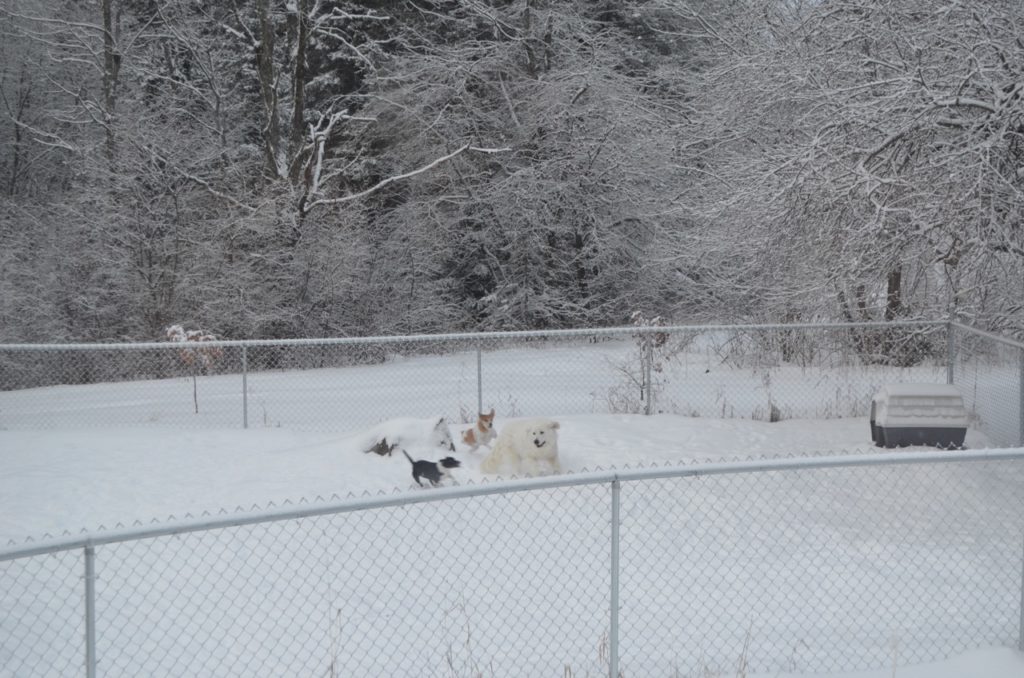 But you can see that Daisy didn’t fall for it and went around the rock to head him off. They’re all moving so fast it’s a little blurry, but you can tell there’s a lot of action going on!

Yet Aaron is so big and his strides so long that he quickly leaves them behind when he wants to: 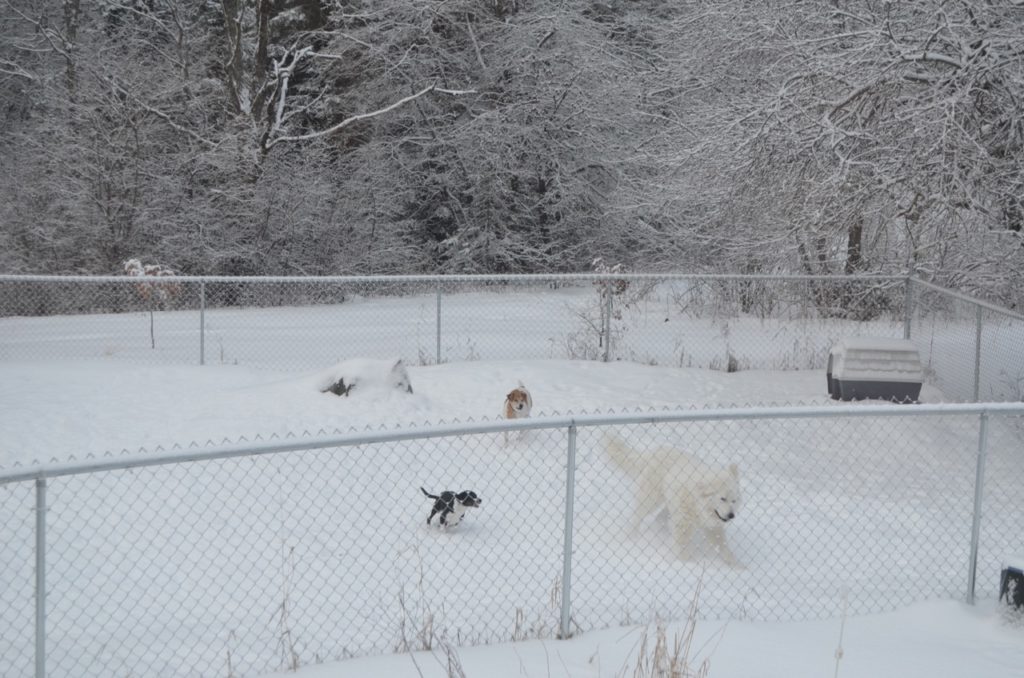 This is now a recurring feature of playtime in the dog yard.

Here’s a close-up of Aaron at the back door, waiting to come in: 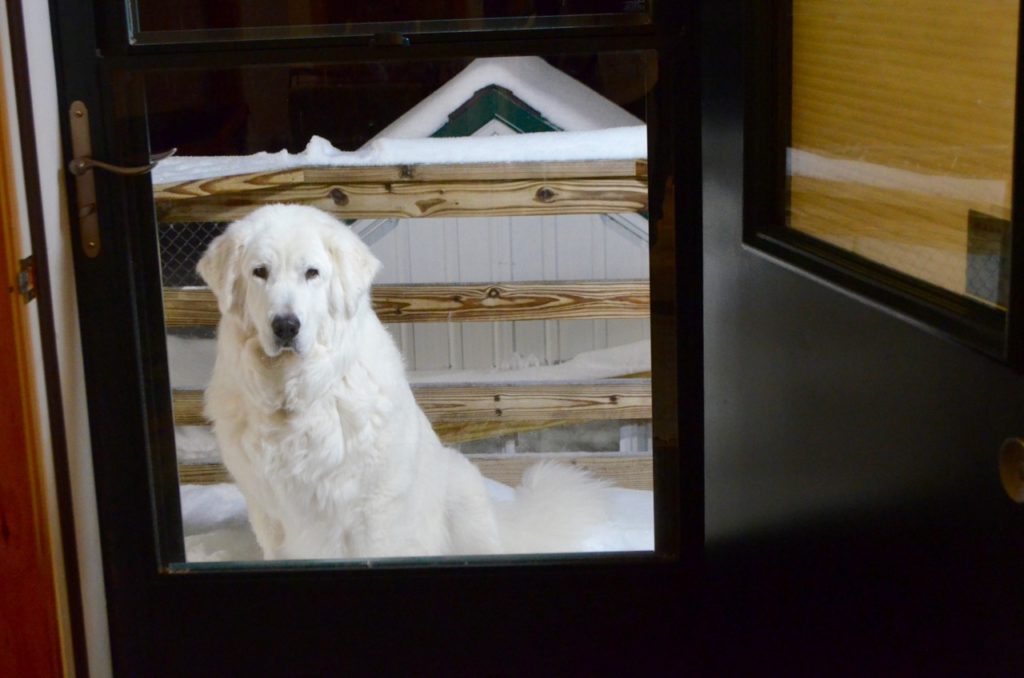 And one last shot of him surveying his domain from the snow bank on the back deck: 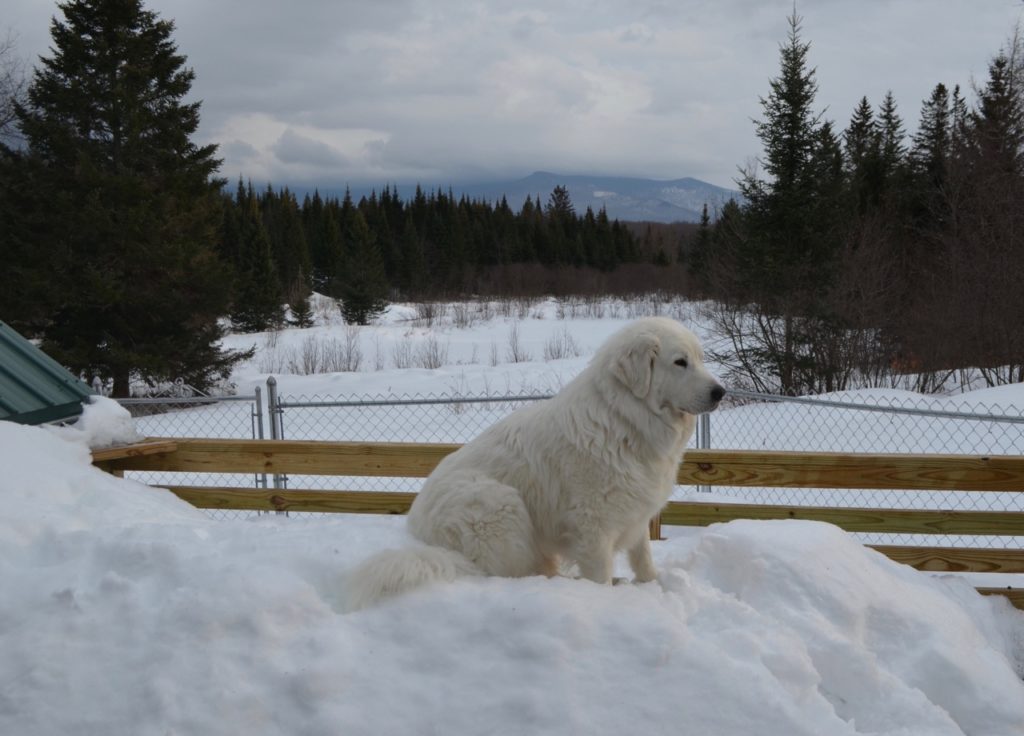 In case you’re wondering, Aaron will be returning to livestock guardian duty this spring when we put the poultry flocks back out on pasture. He loves nothing more than being turned loose in that field every morning. He will know it’s his duty once again to protect his chickens. The only change? He will probably be coming back to the house in the evening instead of the barn!