You are here: Home / Blind Horses / BlindHorses.org … And A Horse Named Ruffles 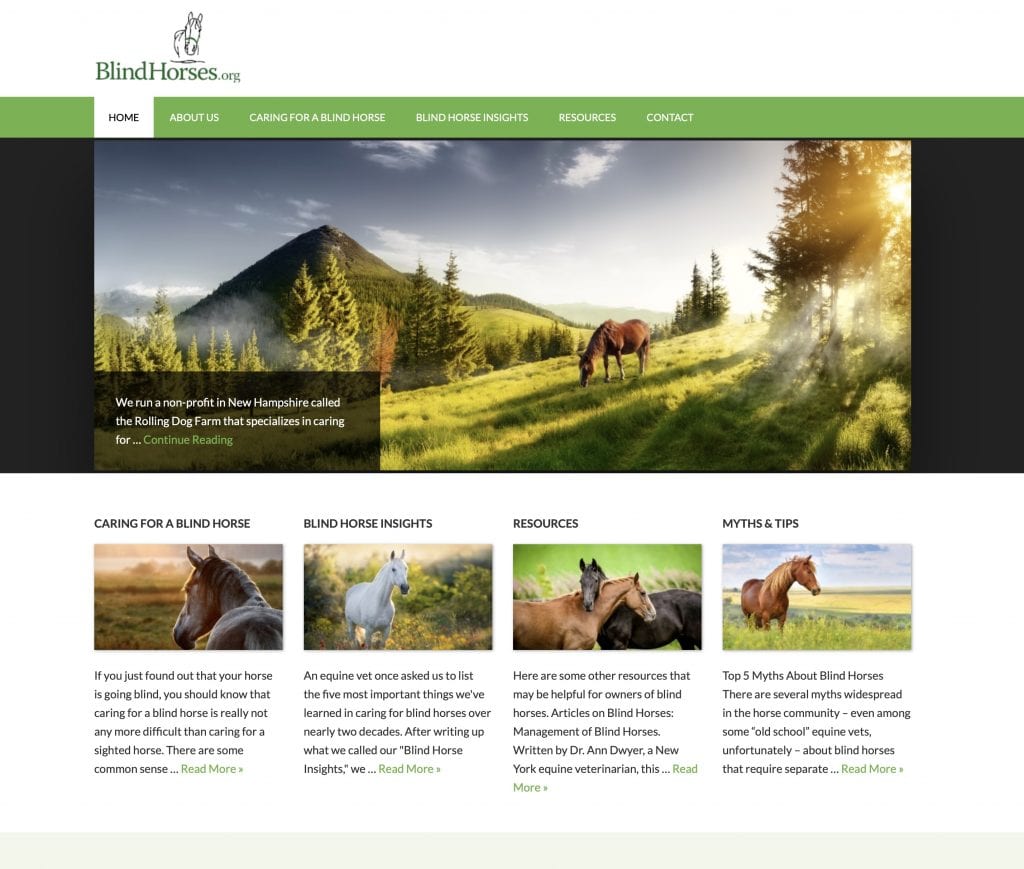 We created BlindHorses.org way back in 2005 as a way to answer all of the calls and emails we were getting about how to care for a blind horse.  Up until then, there was no real source of information on the subject, and the default assumption in the horse community — including among many equine veterinarians — was that a blind horse couldn’t have a good quality of life and that the only humane thing to do was to euthanize it.

But yet there were people who did not want to put their beloved horse down just because it had gone blind.  Through the media coverage we were getting at the time and/or our main website, they had learned we were caring for several blind horses who were thriving and enjoying life, and they turned to us with their questions and concerns.

To help these horse owners, we realized we needed to create a website as a “one-stop shop” of all the things we had learned along the way from our blind horses.  We also had encouragement and support from two of the leading equine ophthalmologists in the country, one in North Carolina and the other in Florida, as well as a New York equine veterinarian, all of whom had blind horse patients who were having wonderful lives.

Our first effort was pretty comprehensive, and other than adding a key veterinary resource to the website a few years later — Dr. Ann Dwyer, the New York equine vet mentioned above, had written a chapter called “Management of Blind Horses” in a new veterinary textbook called Equine Ophthalmology, and we were able to obtain permission to post it online — we had let the site stay as it was.

Well, the time came to finally update the site, move it to a new WordPress platform and new web host, and make other long overdue edits.  In the meantime, Equine Ophthalmology had recently come out in a new, third edition, and Dr. Dwyer had updated her chapter on blind horses in the new edition as well, so we wanted to add the revised chapter to the website, too.

We made the platform changes a couple of months ago, but just finished the content changes in the past couple of weeks.  You’ll find Dr. Dwyer’s chapter on the Resources page of the site.

On this subject, I wanted to share some photos and the story of a blind horse named Ruffles we just learned of last week in a message from our BlindHorses.org site.  First, here is this beautiful 17-year old standardbred mare: 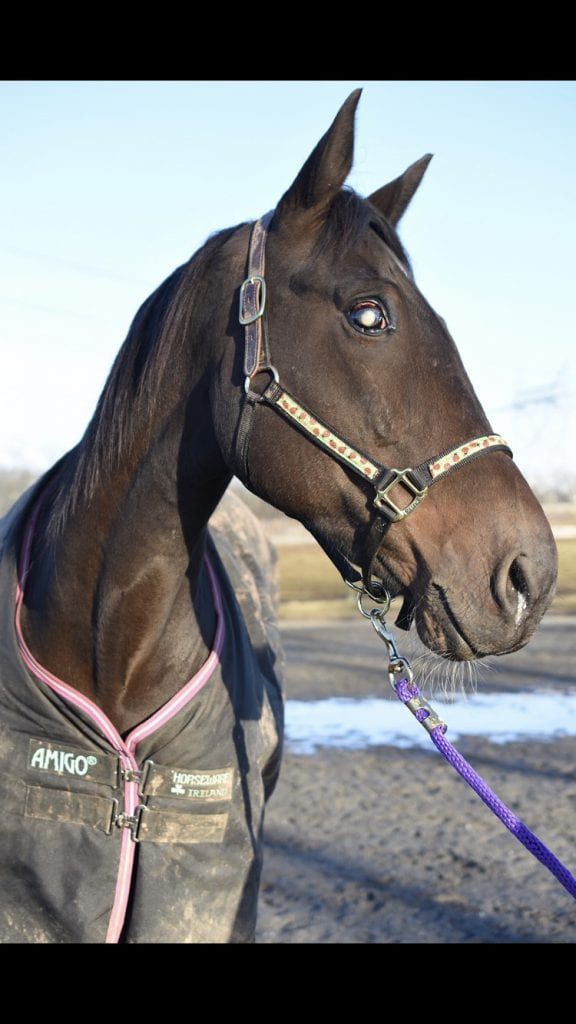 Her owner, Bri, had contacted us after seeing the website, and sent a wonderful note to say:

Just reaching out that I enjoyed reading your website about how to care for blind horses and the positivity centered around it. I have a 17yo blind standardbred mare. I have owned her for about two years and known her for about 4. She was at college in the breeding program when I met her, and a total hot mess she was. She is on her third career now as I like to call it after being a racehorse, broodmare and now she is my pet and companion that I also ride — she enjoys riding so much! Since I have had her she has calmed down from the horse I knew in college who was always nervous, wouldn’t stand still, couldn’t be bathed … the list goes on and on. Having a “person” for her has definitely made a difference. People are amazed that I ride her and how responsive she is to me. She is truly special and I whole heartedly agree with all of your advice and encouragement on your website and just thought I’d reach out. 🙂 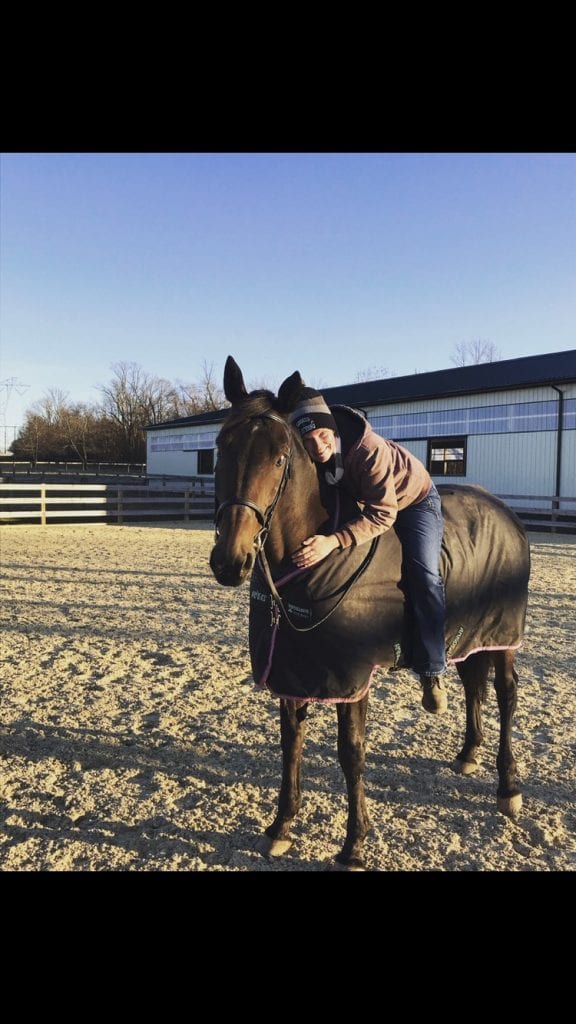 Bri told me later that Ruffles was a harness racehorse whose registered name was “Fast Ruffles.” Harness racehorses pull two-wheeled carts with a “driver” on board the cart, not riding on the horse.

In 2004, racing as a two-year old, Ruffles had won three races out of six starts by October — including one race she won by ten lengths! — and by November she had won five out of nine races she entered, winning more than $300,000 in race earnings. Later during that 2004-2005 race season, however, she suffered a career-ending injury but, as a racing newsletter pointed out, she “still won the $189,225 2-Year-Old Filly Pace in 1.52.4.”

Bri added in an email exchange with me,

Yes, I think having one person work with her and a slower paced environment definitely made a difference. I’m not sure if I mentioned before but I started riding her and don’t think she had ever been ridden prior to me trying because she was a harness racehorse and then a broodmare for several years. We mostly just walk and do some trotting and she really enjoys it!

After retiring from racing, she had eight foals!

As for the horse who couldn’t be bathed?  Well, here she is now: 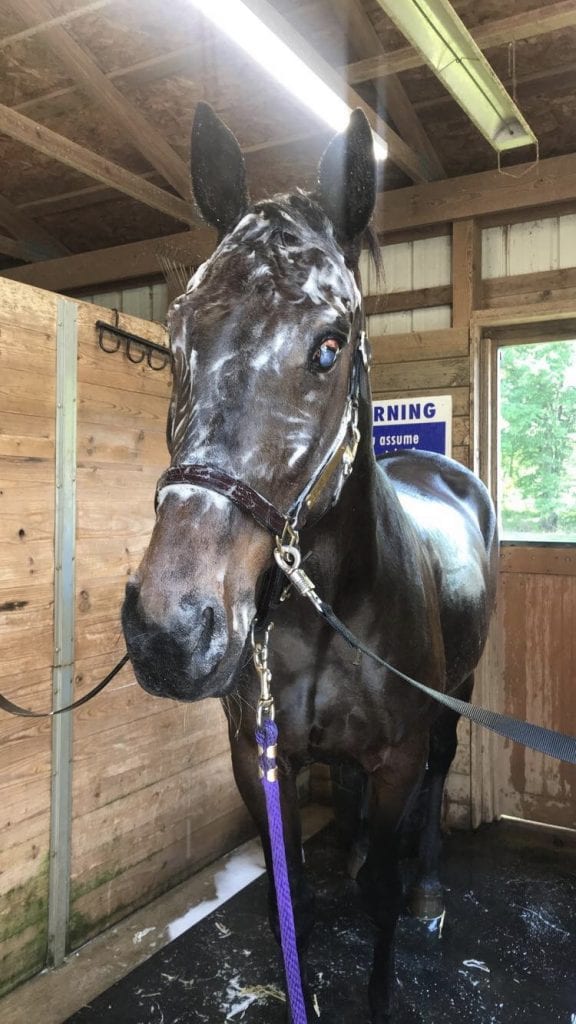 Thanks to Bri for sharing Ruffles’ story and these photos.

Now I just have to explain to our blind mare Lena why we don’t have a bathing stall for her!