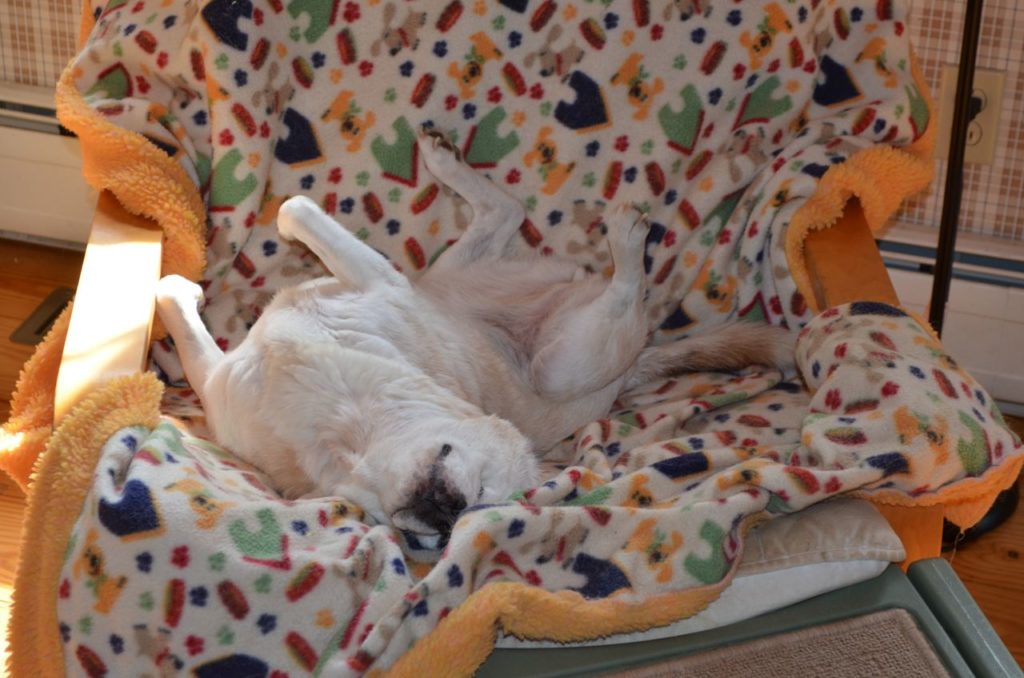 When I took that photo of Aurora a couple of weeks ago, everything had been going so well with her treatment for blood clotting that we had settled into a comfortable routine and were no longer much worried about her condition. Then, last weekend, smack in the middle of haying, she crashed. On Friday we had noticed she was quiet and subdued, but she’d been like that before and all was well. But on Saturday morning when I let her out of her crate, she wouldn’t or couldn’t walk — she just stood there, staring at me with her one eye. She usually bolts out of her crate, barks at me, and races down the stairs. Not this time. I carried her outside and set her down on the grass. She didn’t move. Then she tried to take a step or two and promptly sat down. When I picked her up to get her to stand again, I could tell she didn’t know where her back feet were. She was lost and listless.

A few minutes later Alayne was on the way to the emergency clinic in Littleton with her. I had called the clinic to alert them that we were coming, and I emailed them Aurora’s latest weekly test results from our internal medicine specialist, Dr. Marielle Goossens at Peak Veterinary Referral Center in Burlington. I then called Marielle and left her a voicemail explaining what was going on. At the clinic the emergency vet had already looked at Aurora’s reports that I had emailed. She told Alayne she was amazed Aurora was still alive and had made it this far with her condition. The vet said she’d known of only one other case of protein-losing nephropathy, the technical name for Aurora’s underlying kidney disease, and that was in vet school. That dog had only lived a week.

In effect, Aurora’s?kidneys aren’t working properly and are losing protein, but along with the protein they’re also losing the clotting factors — hence the blot clots that started her down this road and led to this diagnosis. Sure enough, at the emergency clinic Aurora’s kidney values were literally off the chart (her creatine wasn’t even registering on the machine), as were her liver values. Her red blood cells were off the chart at the other end, meaning she was now anemic. The vet — who we have worked with several times before and who is terrific — told Alayne she wondered if we had reached the end with Aurora.

That’s when Marielle called me back, and’soon she was on the phone with the emergency vet. Her first message: We can?get Aurora through this. From that point on, Marielle supervised?Aurora’s care,’talking with the rotating team of emergency vets throughout the weekend, telling them what tests to run and what treatments to provide. We have been in this situation before, and these emergency clinic veterinarians have told me they are grateful’they can turn to our internal medicine specialists for their additional expertise on these difficult cases. What they may rarely see in general?practice is something an internal medicine specialist has seen and treated many times.

So what was going on with Aurora? Well, she had started bleeding internally and wasn’t clotting. That meant adjusting her anti-clotting medications, giving her plasma infusions in the meantime, and other supportive care to give her body time to recover.

As the hours went by, the test results started getting better … and better. We kept haying throughout the weekend,?but it was hard to focus on the work with Aurora lying in the hospital in Littleton.

Late Sunday afternoon we were unloading a trailer of hay bales in the barn when Marielle called with the latest report. We figured we’d need to transfer Aurora to Peak on Monday morning so they could take over, but Marielle had better news: Based on the latest tests’the emergency clinic had called in to her, Marielle determined that Aurora should be in good enough shape to go home on Monday. She wanted to see one more test result Monday morning on Aurora’s clotting?profile, but if that was satisfactory, Aurora would be heading home and not to Peak.

At 7:15 a.m. Monday, as I was driving to Littleton to pick up Aurora, Marielle called again: she was happy with the clotting profiles the clinic had just run, and we could bring Aurora home! We’d need to repeat the blood work on Tuesday at our local clinic in Whitefield to make sure Aurora had maintained her progress, and if so, we wouldn’t need to take her to Peak until Friday.

The test results on Tuesday showed steady improvement – yay! – and so we are on track for Alayne to take Aurora to see Marielle tomorrow.

The second round of the Shelter Challenge for 2014 is underway. You can vote every day at?http://www.shelterchallenge.com/. To search for us, type in our name, Rolling Dog Farm, and Lancaster, NH 03584. We’ve won thousands of dollars in the previous contests, so your daily votes do bring in serious money for our disabled animals!