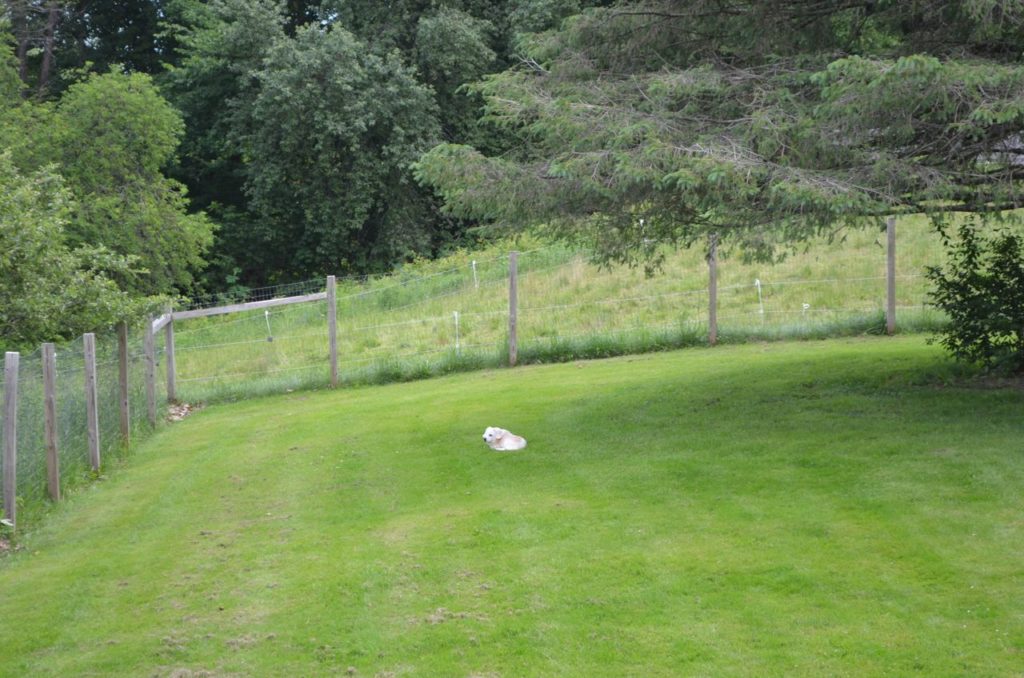 In the past year Aurora — now blind in her remaining eye and partially?deaf — has decided she really doesn’t like it when other people come to the house. It has more to do with the noise of people’s voices rather than their presence per se, because Alayne has noticed that when she’s listening to an interview on NPR, for instance, sometimes Aurora gets the same spooky demeanor she exhibits when people are here. She hears the voices on the radio and concludes people must be in the house.

She’s lost a good part?of her hearing over this last?year, though she can still hear certain sounds — and we suspect this may have something to do with her reaction. It’s just like her vision — she can still see shapes and shadows (light/dark) but nothing else, which makes her spooky in this realm too.

When people come over — the plumber, friends, whoever — she quickly heads to the front door and wants to be let out. Then she walks across the front yard and lays down in the shade of the spruce tree at the far end. She waits until we come get her or until she realizes’that people have finally left. In wintertime, she makes her way up the stairs and tries to hide in Darla’s room until the “all clear” is sounded. She’s not shaking with fear or panicked, but for some reason she just isn’t comfortable when she thinks other people are here. This is a marked contrast to the other dogs, of course, who get all excited when someone shows up — even’the FedEx guy, as I recently mentioned.

Oddly, and this part we haven’t figured out, she looks forward to going to Peak Veterinary Referral Center in Burlington for her regular tests on her kidney function — so being around people there isn’t a problem for her!

Back in April I had a blog post linking to a story in the Guardian about the use of dogs in detecting cancer. Well, the Guardian had another story this weekend on cancer-detecting dogs now being approved for a trial conducted by the National Health Service at a British university hospital. You can read the story here.

As you’ll see, the dog in the accompanying photo with that article looks a lot like Darla, which prompted me to have a conversation with her yesterday about her job skills and employment prospects in this new medical field. Since she’s already had three rounds of mast cell tumor surgeries, and has just completed her chemotherapy, I figured she’d have a?natural affinity for?it. She stretched, rolled over, and looked to me for?a belly rub. “I’m not the working type,” she seemed to be saying.