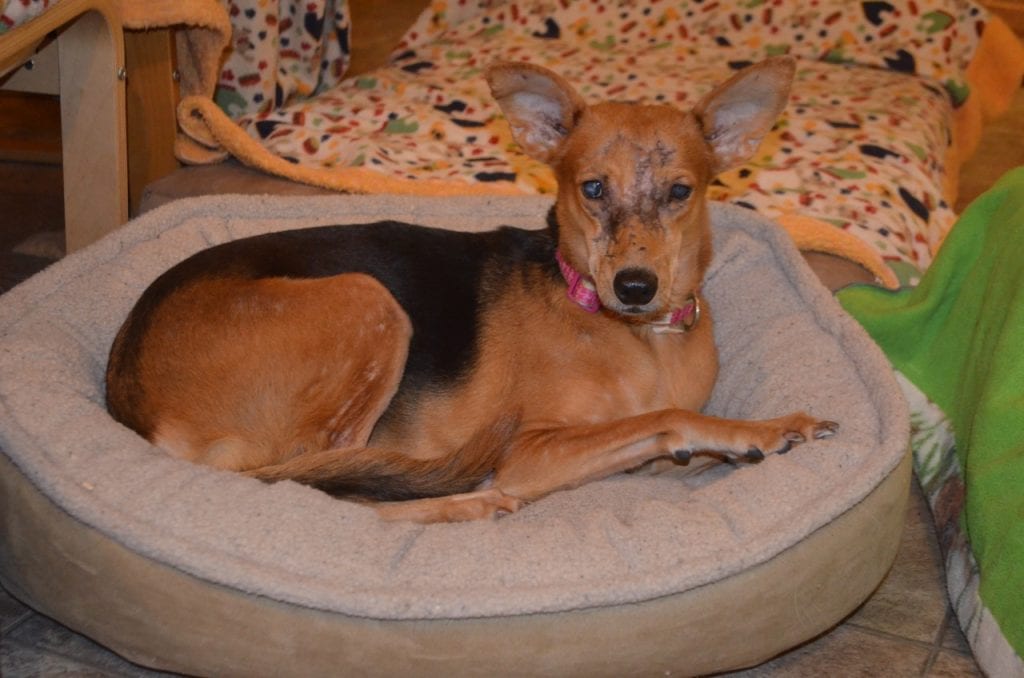 Roxy survived an acid attack that burned her face and eyes, leaving her head covered in scars and with partial vision. Now she’s here with us, ready for a new chapter in her life.

We first learned about Roxy back in June when Martha S. in Boston emailed me about a dog in the Caribbean island of Aruba who had just suffered horrific injuries. A neighbor had thrown acid on her across the fence. Someone took Roxy to a vet clinic for emergency treatment.

Her family didn’t want Roxy back because they were afraid the neighbor would just do it again. A small animal rescue group in Aruba that Martha works with, New Life for Paws Foundation, stepped in to pay the vet bills and take responsibility for Roxy. Martha and her husband have been volunteering with New Life for Paws for several years, making annual trips to Aruba to help the rescue with its work. Crucially, each time they return to the U.S., Martha and her husband bring several homeless Aruban dogs back to Boston and to waiting adopters they’ve lined up.

In her email, Martha asked if we would be able to provide a home for Roxy if she could get her back to Boston. When I read Roxy’s story and saw the photos Martha sent, I didn’t know how we could say anything but, “You bet we’ll take her.”

Here’s what Roxy looked like in the immediate aftermath of the attack … these are disturbing photos, so be prepared if you really want to see them:  This first one shows veterinary staff working on her face right after she arrived at the clinic, while this second one shows you her entire head after they were further along in the process.

But the only way to get dogs out of Aruba is to fly them. That meant waiting until the weather was cool enough, in both Aruba and Miami, to meet the airlines’ temperature thresholds for flying animals. It would be months before Martha could make the trip to Aruba to get Roxy and others.

In the meantime, New Life for Paws found a kind-hearted person named Martine P. to foster Roxy while she recovered from the acid attack and until Martha could get there. Martine cared for Roxy for the last six months.

Finally, Martha booked a trip for late November, returning to Boston on December 3rd — hopefully, weather permitting, with Roxy on board. Miami had suddenly cooled down, but Aruba was still in the mid-80s, so we wouldn’t know until the day of the flight whether the airline would accept Roxy for transport.

At then at 8:05 a.m. last Tuesday, I got an email from Martha at the Aruba airport:  “We are through customs and heading to Miami!”

I had earlier agreed to meet them at Logan airport on arrival, so I got ready to drive down to Boston.

I was at the baggage claim, looking for Martha and her husband, when I heard the “oversized baggage” carousel start up in the corner. I looked over and here came one dog crate … then another … and another. Oh, and then one more!  I walked over and could immediately see which one was Roxy … those ears gave her away. A few minutes later Martha and her husband arrived. Amazingly, they had brought four dogs from Aruba with them, and had homes for all of them.

Martha had described Roxy as “shy,” and she is indeed at first … but she warms up very quickly. She’s also a little skittish, which I think may be due at least in part to the scars on her corneas. I suspect that objects pop up in her vision unexpectedly, depending on her head and eye movement. One minute something is there, then it isn’t; or she’ll look down and not see anything, then look up and suddenly something’s there.

It’s amazing that after seeing how extensive the burns were in those photos that she has any vision left at all, but she does. You can tell in the photo at the top of the post that her eyes don’t look normal — that’s because of the corneal scarring.

Fortunately, I was able to get Roxy an appointment this week with our veterinary ophthalmologist at Peak in Burlington, so on Tuesday — exactly one week after she arrived! — we’ll find out if there’s anything we can do for her eyes.

Roxy is a complete love-bug, by the way. She’s even learned to elbow her way in for affection when she sees one of us petting the other dogs … she’ll come over, force her way into the middle of the scrum, and stand there waiting to get petted. If she doesn’t think she’s getting enough attention, she’ll start using her nose to push on me, or to push my hand away from another dog, to make sure she gets her fair share!

She’s already gotten attached to both Alayne and me, and loves to follow us around the house. In fact, sometimes she can’t make up her mind who she wants to be with, so she runs back and forth, checking out each of us in turn and seeing what we’re up to at that moment.

She gets along great with all the other dogs, who have accepted her into the family with no hesitation. This morning when I was letting Daisy — a.k.a. “Hotshot” — outside to go pee, Roxy raced up to the door and then went running out with Daisy, side by side, down the ramp, across the deck, and down the other ramp to the dog yard. While Daisy was peeing, Roxy ran circles around her, then the two of them raced back to the house together. It was minus 3 degrees (-19° C), and Island Girl had just shown she was tough enough to deal with this ridiculous New England weather.

I took the photo above last night in the living room, where the wood stove was going and we had gathered after dinner. But her favorite place during the day … at least when I’m in my office … is the round bed next to my desk. In fact, as I write this on Sunday afternoon, here she is: 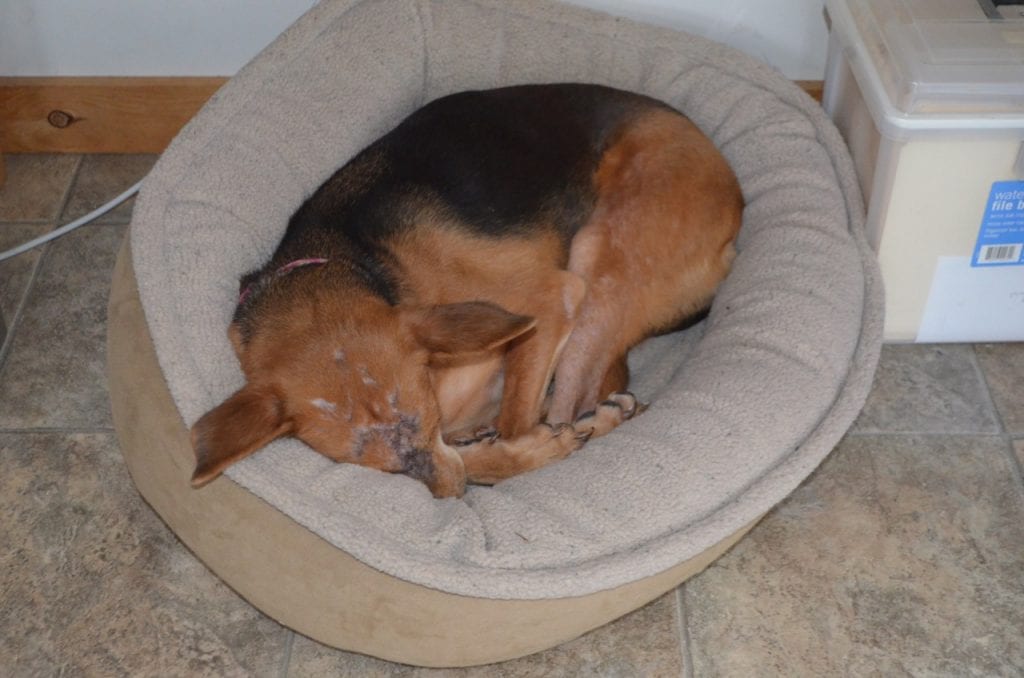 But when she’s not sleeping, it’s more like this: 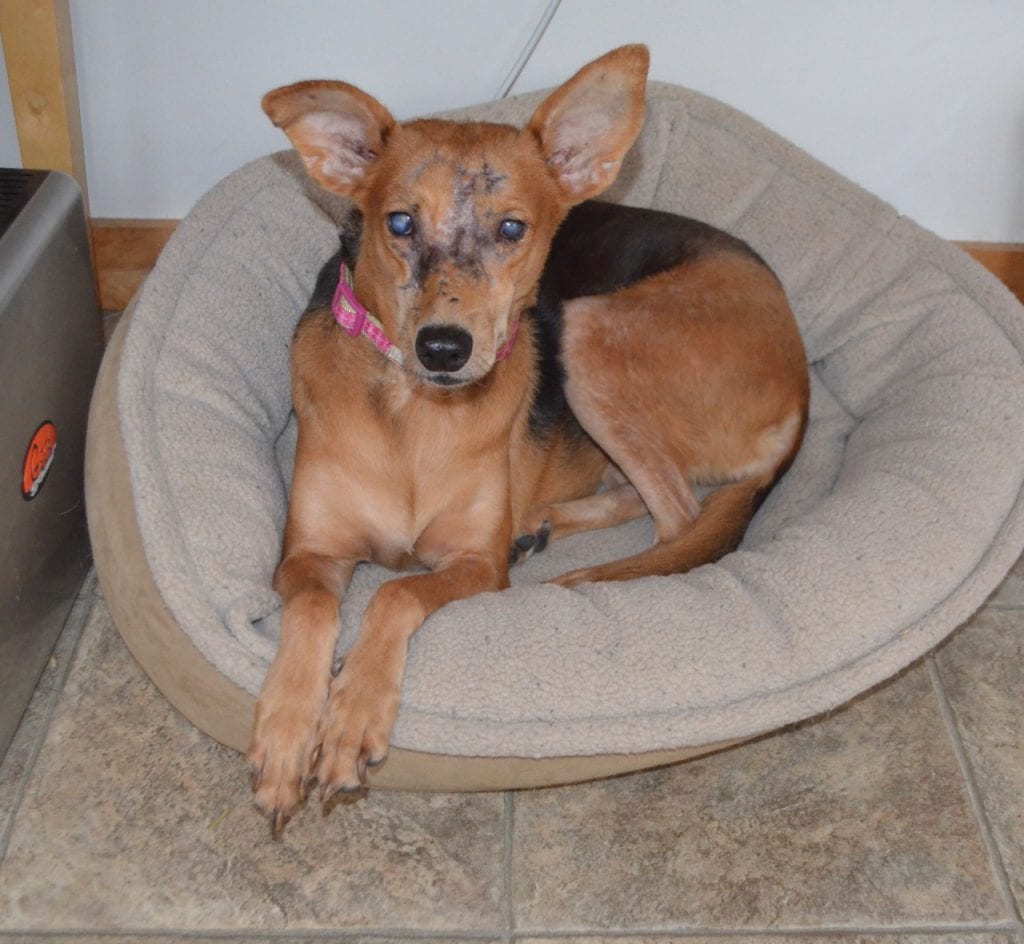 And when another dog like Daisy gets to that bed first, Roxy gets really put out that someone’s in “her” bed … so I have to get the other round bed from the living room and bring it into my office for her.

Roxy is only three years old, so we hope to have her for many years to come. It’s only thanks to wonderful, caring people like Martha, the New Life for Paws folks, and Martine that Roxy got that chance to spend the rest of her life with us, and without having to fear any more abuse. If you’d like to support New Life for Paws, and thank them for rescuing Roxy and so many others in desperate need, you can make a donation on their website here.