You are here: Home / Dogs / A True Story 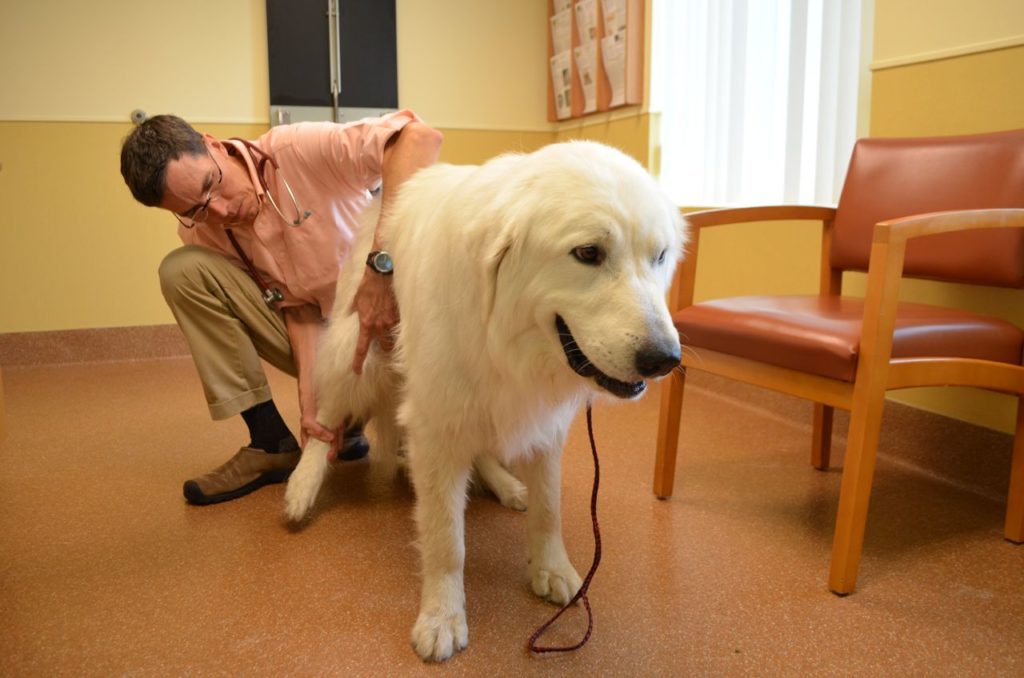 That’s our Maremma livestock guardian dog Aaron — our “white lion,” as we call him — with our veterinary surgeon, Dr. Kurt Schulz at Peak Veterinary Referral Center in Burlington. I took the photo a few weeks ago, when we were on the “blog break.” Aaron had blown out his cruciate ligament the previous week. We had gone out to bring the goats in from pasture and Aaron came bounding up to the gate on three legs. At first we’thought he might have pulled a muscle, but after getting him into the barn and examining his leg, we?realized something more serious had happened.

Of course, he’s our lead guardian dog, we’re in the middle of grazing season, and we knew managing post-surgery orthopedic care for a 120 lb dog would not be easy. Kurt recommended a knee surgery procedure called a TPLO. This would?require 8 weeks of recuperation and would mean we’d need to have?him in the house — the first time Aaron would live anywhere but the barn with his goats and the other Maremmas.

So here’s the true story: Right after Kurt finished the knee surgery, the vet techs were trying to wake Aaron up from anesthesia. He was lying on the table, completely conked out. Theresa, one of the surgery vet techs, was rubbing on him, calling his name, loving him up … and nothing was working. He lay there, breathing soundly but not waking up. Theresa continued … and continued. Aaron didn’t respond.

Finally, Theresa had to check on another case, so another surgery tech, Anthi, offered to take over the task of waking Aaron up from anesthesia. She started to do the same things Theresa had done … calling his name, rubbing on him, any number of things to stimulate his senses. Nothing worked. Then … knowing Aaron?was a livestock guardian dog … she made a loud bleating noise, just like a sheep or goat. In an instant, Aaron snapped awake, raised his head up off the table and looked around, eyes wide open. Just like that. Having watched it happen, the other staff members were incredulous and asked Anthi how she knew to do that. “Easy,” she said. “I’m Greek.”

When I went to pick up Aaron the next day, people at Peak were telling me this story, still amazed at how Aaron went in a second from unresponsive to totally awake, simply because he thought he heard the sound of a goat.

Back at the farm, we set up a hospital pen for Aaron in the dog room. This was both for post-op sanitary reasons and to keep him quiet and confined during his long, slow recovery. The biggest management challenge turned out not to be the leg, however, but in Aaron’s head. Although he loves us — he’s probably the most affectionate, loving dog I’ve ever known! — he was morose and unhappy being in the house and away from the goats and the other guardian dogs. He was out of his element.

Early on I brought our older Maremma Gina to hang out with him in his pen, but that didn’t work … she’d sit up next to him, wondering why she was in the house, and it didn’t change how he felt: 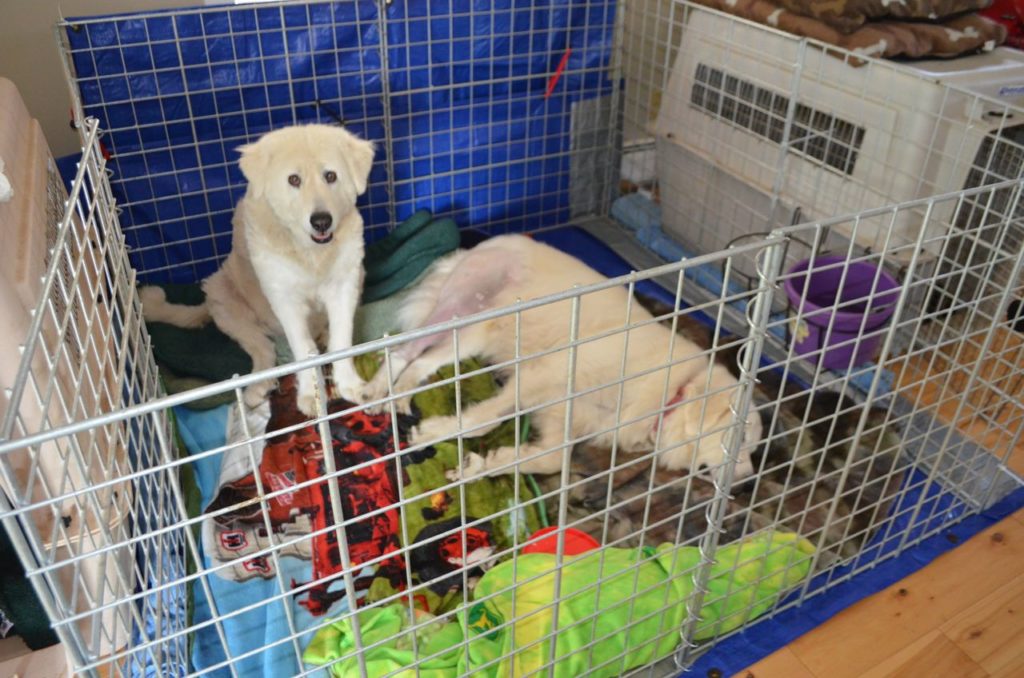 (That’s a giant dog crate next to Aaron, so it gives you some idea of how big he is.)

He refused to eat for a week, no matter what we offered him … including roast beef, sliced ham, rotisserie chicken, any number of different dog foods, treats, cheese, peanut butter, you name it. Finally we found he would eat sliced turkey … but only turkey, and he wouldn’t eat enough to sustain himself. So during this entire time I had to do some force feeding to make sure he was getting enough nutrition and to keep something in his stomach. (Please imagine the other dogs standing there watching Aaron turn his head away from sliced roast beef. We’re sure they were thinking, “Good grief, this dog needs a shrink!”) Finally, after about 10 days, he began eating normally again, and now he’s back on a regular?diet.

Once he could go for walks again, I’ve taken him down to the goat barn to visit with the goats and see the other Maremmas. Nothing makes him happier … his face lights up when we get to the barn and his tail starts wagging. After he gets his fix and I say it’s time to leave, he drops his head and reluctantly follows me back to the house. He’s resigned to being a “house dog” for the moment, though I think his visits with his friends in the barn give him hope he will be returning to duty some day. Only five more weeks to go!

The latest round of the Shelter Challenge for 2014 is underway. It began July 14 and ends September 21. You can vote every day at?http://www.shelterchallenge.com/. To search for us, type in our name, Rolling Dog Farm, and Lancaster, NH 03584. We’ve won thousands of dollars in the previous contests, so your daily votes do bring in serious money for our disabled animals!